Ram calls its new Hellcat-powered TRX pickup the “apex predator of the truck world.”
The reference is a thinly veiled attack on what has long reigned as the king of performance trucks, the Ford F-150 Raptor, which has blasted its way through deserts and sand dunes to achieve legendary status.
After driving the TRX for a week, though, I think the bluster is totally justified.
Ram could have simply stuffed the gargantuan, supercharged Hellcat V8 under the hood of its half-ton truck and generated plenty of attention. Instead of a simple engine swap, though, it opted to rewrite the rule book for what a performance pickup can be.
The TRX isn’t just the fastest mass-produced truck in the world, moving from zero to 60 mph in 4.5 seconds thanks to the 702-horsepower engine. It’s also incredibly supple and refined, with the nicest cabin available in any truck for sale today, while simultaneously beefed up to handle all the abuse YouTubers and off-road enthusiasts can throw at it. 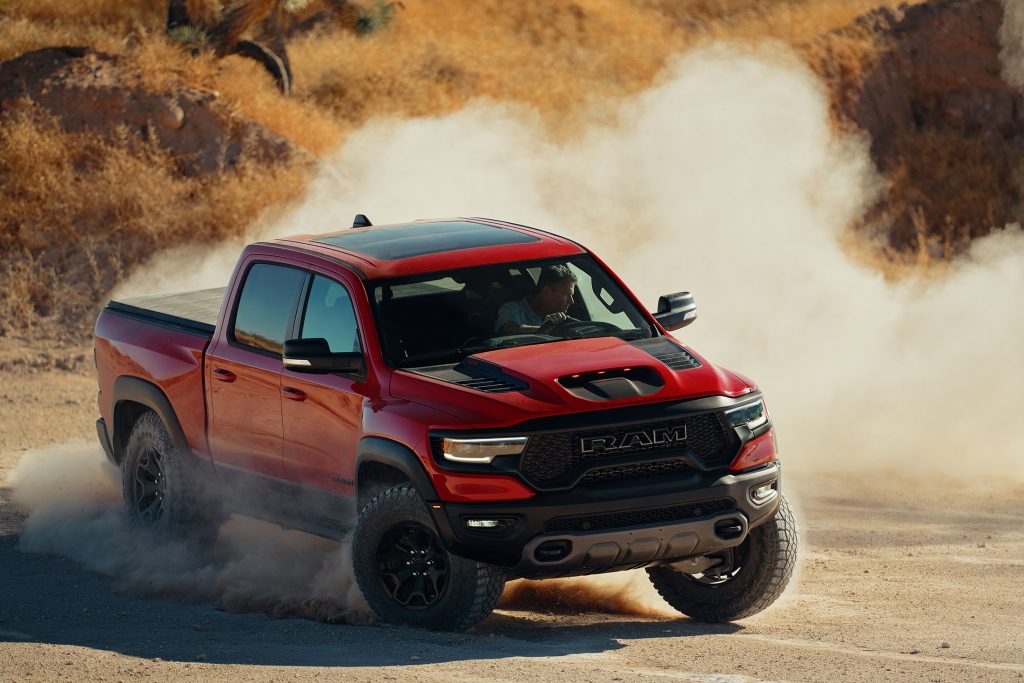 The Ram 1500 TRX is designed for high-speed off-road driving. It makes more than 700 horsepower and comes with a sophisticated suspension system designed for off-roading at triple-digit speeds.

To say this truck is quick is an understatement. Despite the fact that it weighs nearly 6,400 pounds, it feels like it belongs at a drag strip where you can test whether Ram is telling the truth about its 12.9-second time in the quarter mile. The sounds, sensations and speed all seem like they’re coming from a race car more than a truck.
Honestly, though, the speed isn’t a surprise to me. You could put a Hellcat engine in a dump truck, and it would still be a hoot to drive.
What surprised me was the highway comfort. I’m used to off-road specialty trucks feeling rougher and noisier than their on-road counterparts, and I expected the same from the TRX. This is the most extreme mass-produced truck on the planet, and I expected it to feel that way, at least somewhat raw and rough around the edges.
Instead, the TRX feels as gentle as a golden retriever at highway speeds as long as you keep the throttle within limits. Wind and road noise are almost nonexistent, similar to the feeling in Ram’s best-in-the-business luxury trims.
That’s especially surprising given just how much of a beating the TRX is built to handle.
A new frame was designed to help it withstand the rigors of high-speed off-roading, using lots of high-strength steel to make it more durable. It’s eight inches wider than a typical Ram 1500, something that helps with stability and allows more clearance for its monster 35-inch Goodyear all-terrain tires.
Despite the Hellcat engine getting most of the attention, its suspension is where the real magic happens.
The TRX uses sophisticated active damping controls to keep the truck stable and smooth as it rockets over uneven surfaces, doing exactly what made the Raptor a legend, with a whopping 13 inches of wheel travel at all four corners. 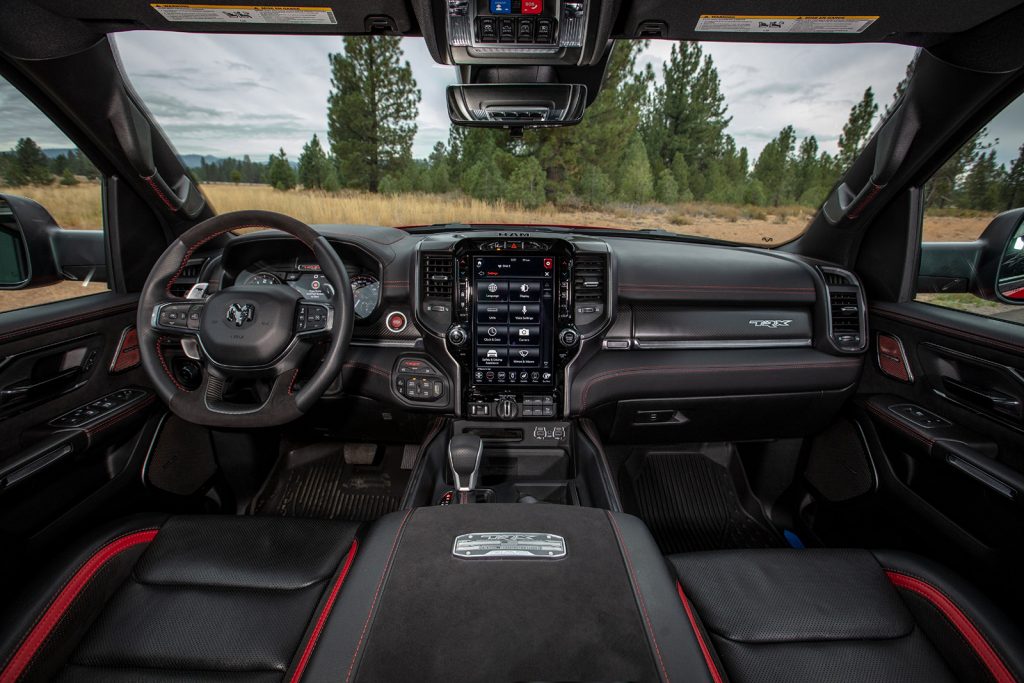 The TRX inherits the Ram 1500’s spectacular cabin, the nicest interior of any truck for sale today.

Ram worked with Bilstein to design shocks that can react quickly and handle the immense heat that’s generated when driving faster than 100 mph off the pavement. The end result feels magical and achieves something I never thought I’d write: it’s better than the Raptor.
With more power, a stouter feeling chassis and a brilliant suspension design, Ram has managed to dethrone the best truck Ford — or any manufacturer, for that matter — has created to date.
There’s a new king, and its name is TRX.
That’s not to say this monarch is perfect, though. It’s an expensive toy, priced over $70,000, and gets absolutely awful gas mileage of 10 mpg in the city and 14 on the highway. Plus, to some people, the TRX’s on-road refinement could be a downside if they want it to feel more like an extreme truck from the driver’s seat.
For TRX buyers, I’m guessing none of that will matter. It’s a small price to pay for driving the best of the best, a factory-built truck that drives like a muscle car and can go almost anywhere.

Why buy it?
It’s about a lot more than the Hellcat engine shoehorned under the hood. A sophisticated suspension, upscale cabin, rugged frame and unmatched capability make this the new king of performance trucks.