For people who need a new compact crossover for logical reasons but still want some emotional appeal, the Hyundai Kona checks the right boxes.
As an all-new vehicle introduced last year, the Kona satisfies all the boring, left-brain needs of car shoppers. It offers a terrific warranty, for example, for five years or 60,000 miles on the whole car and a decade or 100,000 miles on the powertrain.
It has a roomy cabin, especially in the front seats, and a more-than-reasonable 19.2 cubic feet of cargo volume in back. It also sips gas like a compact car, federally rated for 27 mpg in city driving snd 33 on the highway.
Where the Kona stands out, though, is not in the needs it satisfies, but the wants.
It looks better than most crossovers to my eyes, especially up front with its swept-back headlights and hood that seems unusually long and sleek for its class.
The Kona can come equipped with today’s newest safety and semi-autonomous-driving features such as Lane Keeping Assist, blind spot warnings and systems that can avoid accidents and sense pedestrians.
It also comes standard with a seven-inch “floating” touchscreen on the center of the dash, including both Android Auto and Apple CarPlay connectivity to keep your smartphone connected. 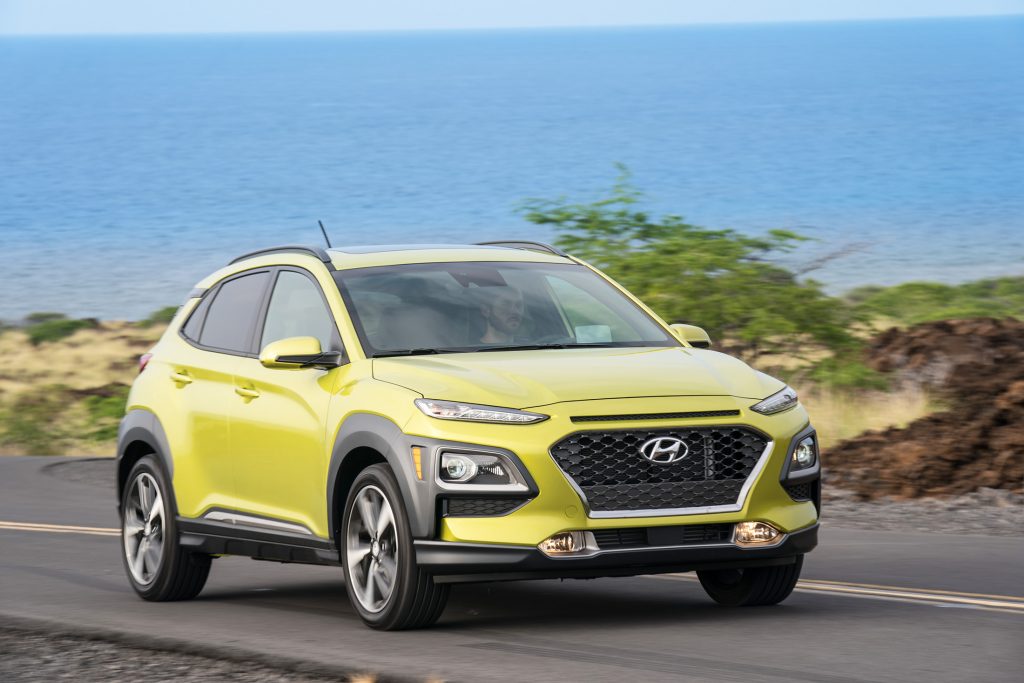 The Hyundai Kona looks sleeker than many of its crossover competitors, especially up front with its elongated headlights and large grille.

Its driving dynamics, while not exactly sports-sedan-like, still feel like a cut above most of its compact crossover competitors. It rides on an all-new platform designed not just to maximize interior space but to deliver enjoyable handling characteristics.
Its underfloor layout packages the all-wheel-drive and exhaust components in a way that reduces the intrusion of a central tunnel into occupant space, something that really makes a difference. The same thing applies to its rear suspension design, which is tucked down low to create the most back seat and cargo volume possible.
My tester was not the most fun-to-drive Kona. Its naturally aspirated, 2.0-liter engine and 17-inch wheels combined to make it feel surefooted and reasonably quick, but not as enjoyable as ones with the more driver-focused powertrain: a 1.6-liter turbocharged engine coupled to a seven-speed, dual-clutch transmission.
Throw in some 18-inch wheels, and the turbocharged Kona — like the one I drove last year — feels dramatically more connected to the road and responsive than the 2.0-liter version. It’s a stunning difference, but not all drivers will need or even appreciate it. 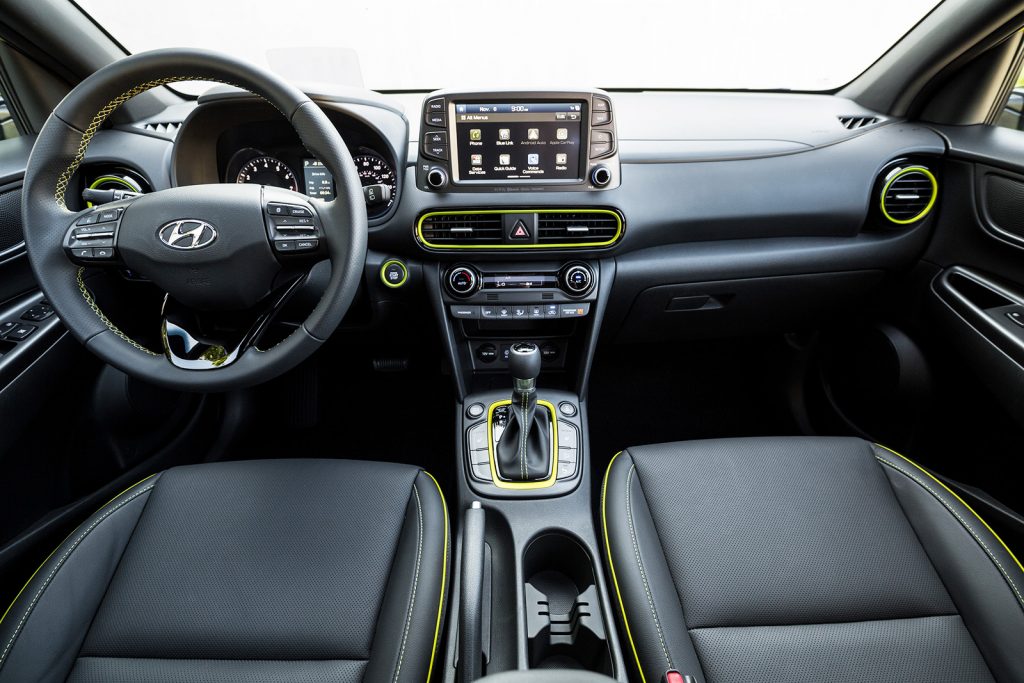 Technology is easy to access in the Kona’s cabin. A seven-inch touchscreen with Apple CarPlay and Android Auto comes standard.

There were no substantial changes made, or needed, for 2019. It still feels very competent amid an ocean of well-engineered, heavily marketed crossover competitors.
One notable omission: the 2018 and 2019 Kona do not offer radar cruise control, an increasingly common feature even on compact cars. Hyundai will fix this starting in the 2020 model year with its newly developed Smart Cruise Control system, which uses radar sensors to maintain a set distance from the vehicle in front of you.
Pricing for the 2019 Kona starts just under $20,000. The turbocharged version starts at $25,550 with the front-wheel drive, or an additional $1,400 with all-wheel drive.
The lineup tops out with the special, well-equipped Iron Man edition at $31,950 including AWD and the turbocharged powertrain.

Why buy it?
The Kona offers more style and driver-focused appeal than the average crossover, with a choice of two efficient powertrains. Its standard tech features are impressive for the price.