Let’s start with the obvious question: why does this car exist?
Considering how Toyota already makes the Prius — arguably the best and unquestionably the most popular hybrid car on the planet — it’s tough to make the case that the new-for-2020 Corolla Hybrid is necessary.
They’re both priced about the same, starting at $23,100 for the first-ever hybrid version of the Corolla and $24,200 for the more well-known Prius.
They’re both rated within spitting distance of identical fuel economy, too, with the Prius getting a slightly better rating in the city and the Corolla winning on the highway. The Corolla Hybrid is rated for 53 mpg in town and 52 on the highway, compared to 54 and 50 for the Prius.
They’re even similar in functionality and driving feel, with a practical four-door layout, reasonably roomy back seat and acceleration clearly designed more for sipping gas than for winning stoplight races.
On paper, they’re practically the same car. 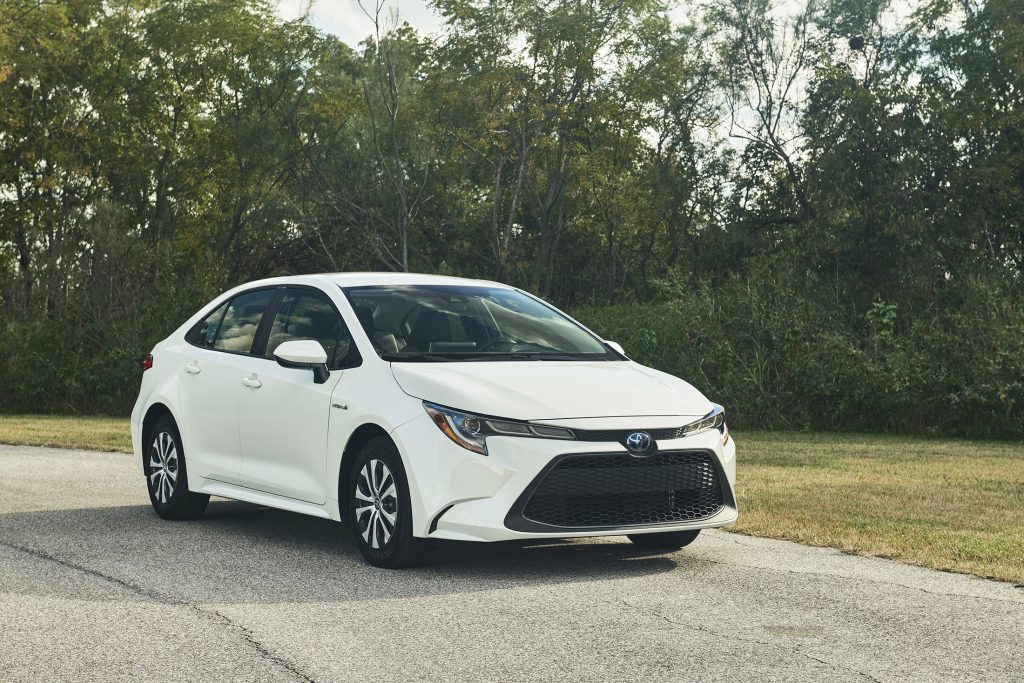 Toyota is introducing a hybrid version of the Corolla for the first time ever as a 2020 model. It drives similar to the gas-electric Prius but looks more like a traditional sedan.

I think the gas-electric Corolla exists for one reason, though: some buyers are turned off by the Prius’ weirdness.
The Corolla Hybrid can offer the same benefits while looking and feeling much more “normal” for people who don’t want to deal with the Earth-saving, vegan, hippie, Prius-driving stereotypes.
It also benefits from the same advantages the all-new-for-2020 regular Corolla brings to the table.
While it’s still far from a sports sedan, the new Corolla gets a complete makeover that helps it feel more solid and engaging from the driver’s seat. This new generation feels connected to the road in a way that the last generation never did, mainly thanks to better suspension tuning and improved steering.
It also comes with a surprising level of standard equipment for the price, including a package of active safety and convenience features called Toyota Safety Sense 2.0.
That means every Corolla — even the base gasoline-only version priced at $19,600 — comes with radar cruise control, lane departure alert with steering assist, automatic high beams, road sign assist and even lane tracing assist, which essentially steers the car for you to keep it centered in the lane of a well-marked highway or street.
That’s unusual because most of its competitors limit those features to their luxury trim levels or offer them as upgrades for an extra charge. 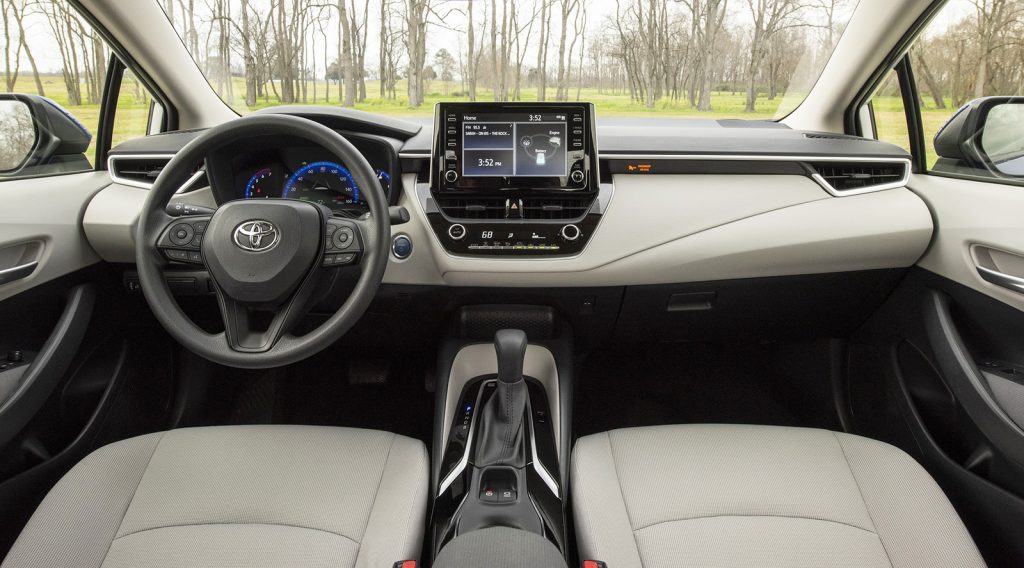 People who remember compact Corolla models of the past will be pleasantly surprised at just how spacious the popular car’s new-for-2020 version has become. It gets a completely fresh design this year.

It also comes standard with a highly capable infotainment system with an 8-inch touchscreen, Apple CarPlay and a built-in Amazon Alexa assistant.
Driving the Corolla Hybrid is unremarkable, which I think is the whole point. Its cabin feels comfortable and familiar, and neither its body nor its powertrain yell for attention about its remarkably advanced contents under the skin, including a powerful but small battery that is packaged under the back seat and two electric motors that improve the fuel efficiency of its 1.8-liter gasoline engine.
Interestingly, the Corolla Hybrid is only available in a single trim level, the LE, with cloth seats and a very well-equipped cabin. You just choose your color and pick from a short list of accessories such as a cargo net in the trunk, door sill protectors or carpeted floor mats.
It’s an exercise in simplicity for both design and the sales process. In an overcomplicated world, Toyota’s approach is refreshing.

Why buy it?
The new-generation Corolla has a more engaged, solid driving feel and excellent level of equipment on the base model. The hybrid version gets Prius-like gas mileage without the oddball styling.