Toyota knows its truck buyers don’t necessarily follow the pack.
While Ford, General Motors and Ram dominate the American full-size pickup market, the all-new Toyota Tundra takes a decidedly contrarian path with a total redesign for 2022.
In some ways, it’s more like those American-brand trucks that drive such big sales numbers — and profits — for the companies that build them. It’s roomier, bolder, stronger, tougher and more capable than ever before, following the same playbook domestic trucks have used for decades. Those descriptors are familiar.
At the same time, the new Tundra takes a controversial and unprecedented path by omitting the one thing every other full-size truck offers: a V8 engine.
Will full-size pickup buyers embrace a truck that doesn’t offer a V8? It’s an open question.
To be sure, the powertrain Toyota fitted to its new truck is as impressive as any eight-cylinder competitor. The 3.5-liter, twin-turbo V6 makes 389 horsepower and 479 pound-feet of torque, enough to make the 5,095-pound truck feel noticeably quicker than the outgoing Tundra.
It’s also impressively refined. Toyota’s former V8 was spectacularly smooth, but the new turbo V6 feels even smoother to me. Coupled with a 10-speed automatic transmission, its driving experience is as robust and responsive as any truck on the market. 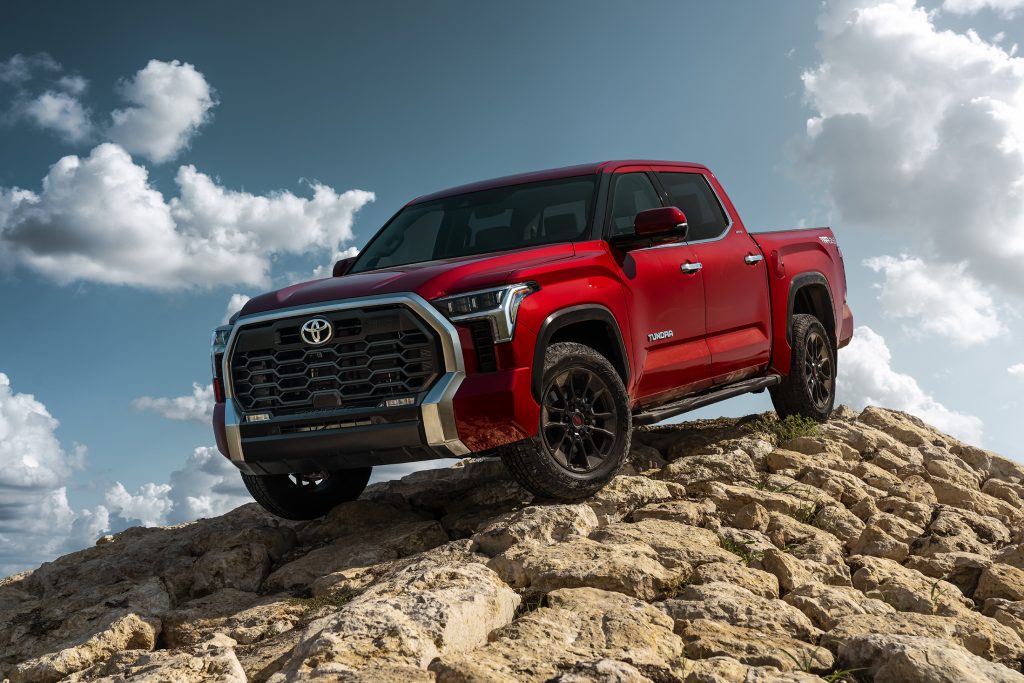 A huge grille opening and muscular fenders are among the many dramatic changes on the Toyota Tundra. It is completely redesigned for 2022.

Part of that refined feeling comes from another unconventional change: ditching the old leaf-spring suspension. Like the latest Ram 1500, the new Tundra uses coil springs in back, which deliver a more buttery, less bouncy ride than leaf springs do. The ride is so much more appealing that I predict all the truck makers will get rid of the old leaf-spring designs within the next few years.
Soon the Tundra will get even more muscular, too. Toyota says it will offer a hybrid version of the powertrain that uses electrific motors to boost its output all the way to 437 horsepower and 583 pound-feet.
The new Tundra is rated to tow up to 12,000 pounds or haul 1,940 pounds of cargo. That’s more than the outgoing version but doesn’t quite match some domestic trucks’ numbers including the current crown-holder, the Ford F-150, with its 14,000-pound tow rating and 3,250-pound payload capacity.
Finally, the 2022 Tundra looks completely fresh inside and out.
Toyota is proud of the fact that the Tundra is a thoroughly American product. It’s built in Texas and was designed by teams in California and Michigan specifically to appeal to American buyers, and you can sense that everywhere you look. 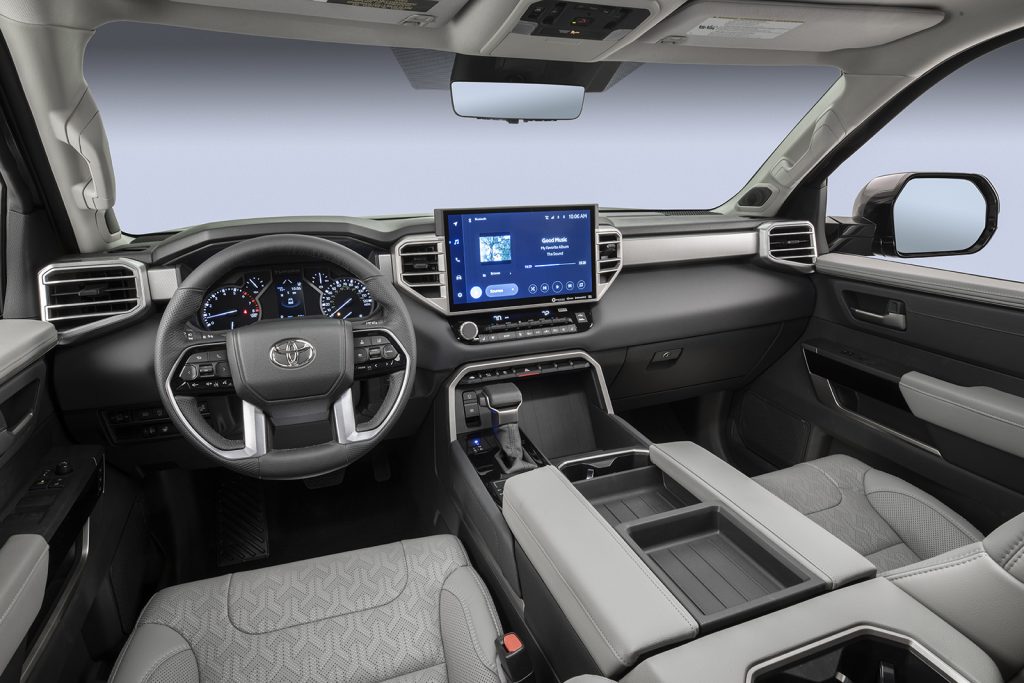 The all-new Tundra has a contemporary, tech-focused cabin that is a major upgrade over the outgoing model.

The new body mimics the same “bigger is better” philosophy that domestic brand trucks are taking to extremes lately, with a grille that is comically large and an upright stance that looks like it’s trying to both intimidate and imitate the 18-wheelers that crowd American highways.
It drives the tough-guy point home with fender flares and a bulging hood.
Inside, everything about the Tundra is a dramatic upgrade. Materials are soft. Construction is tight and precise. The layout is logical and comfortable, right down to little details like the wide, comfy shelf where your arm can rest by the window.
It’s also thoroughly modern. Like all the best contemporary cars, a huge digital touchscreen takes center stage with an array of useful and entertaining features, including wireless connection to smartphones and a number of new aids for towing and off-road driving.
Toyota has not released pricing for the new Tundra. The outgoing 2021 model starts at $34,025 and tops out at $53,400 for the off-road-focused TRD Pro.

Why buy it?
A total redesign gives the Tundra a very modern, capable upgrade for 2022. A new, bold look and sophisticated turbocharged V6 headline the many changes.