As popular as they are, I have one consistent complaint about crossover vehicles.
They often look like boring, copycat metal blobs that make it tough for the average person to tell the difference between a Ford, a Volkswagen or a Honda.
When completely redesigning the Tucson for 2022, though, Hyundai decided not to go down that drab, lookalike path. The all-new Tuscon actually looks different from every other small crossover for sale today.
The overall shape is familiar, but the body has waves, bulges and creases that catch the eye, especially from the side profile. Its back end has taillights shaped like a predator’s teeth and a logo placed up high on the glass, not on the sheet metal, to avoid disrupting the pretty lines.
It’s a daring move from Hyundai that seems to value the input of talented designers more than corporate focus groups.
Will it work? I hope so, because a sales hit would encourage other companies to look outside the dull box crossovers have inhabited for the past decade. 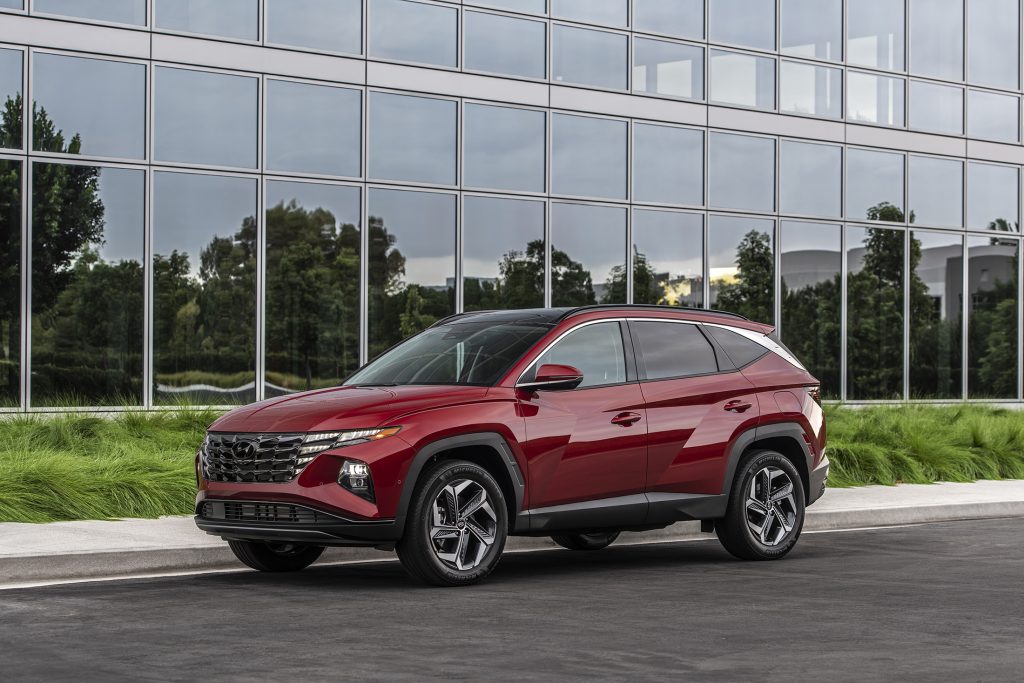 Fortunately, the new Tucson has more selling points to pile on top of the crisp look.
Its interior is fabulous for the price point, starting under $25,000 but mimicking the modern design and solid feel of more expensive vehicles. The vents are cleanly integrated into the dash, and two digital screens mounted behind the steering wheel and high on the center stack make its myriad tech goodies easy to access.
The graphics alone make it feel like a next-generation car. Again, Hyundai is giving authority to some talented designers, and it shows in the finished product with menus and functionality that seem as sleek as the newest Apple devices.
The new Tucson has all the things that make today’s buyers want to upgrade to a new car — advanced safety features, semi-autonomous driving assistance, seamless smartphone integration and more — all executed in a top-notch way.
A great example is Highway Driving Assist, the feature that lets the Tucson essentially pilot itself on freeways, albeit with the driver still paying attention. It doesn’t ping-pong between lane markers or slam on the brakes unnecessarily, instead reacting more smoothly and naturally as if a human driver were in control. It’s a better experience than many similar systems from other companies.

The new-for-2022 Tucson’s cabin looks modern and luxurious for its price point. It starts under $25,000 and tops out around $37,000 for the Limited Hybrid model.

While the gasoline Tucson is fitted with a 2.5-liter, 187-horsepower, four-cylinder engine, my tester was the Hybrid model.  Not only does it get 30 percent better fuel economy than the gasoline Tucson, Hyundai claims, but it also makes 20 percent more torque for easy acceleration.
On the highway, it offers one of the best experiences of any small crossover I’ve driven. It’s smooth, quiet and quick to respond to input from the driver, including plenty of power for passing, like a smaller version of Hyundai’s spectacular Palisade.
The new Tucson feels more mundane around town, though, with a blend of comfort and sportiness that’s neither exciting nor disappointing.
It does offer an exciting optional feature: the ability to let you stand outside the vehicle and remotely move it forward or backward using buttons on the key fob. It’s designed to let you back in and out of super-tight parking spaces, but I envision it more often being used to gather your friends in the driveway to say, “Hey, look what my new car can do!”
Pricing starts at $24,950 for the base SE grade with front-wheel drive and ranges up to $34,700 for the Limited. All-wheel drive adds another $1,500 to those numbers.
If you want a Hybrid, it starts at $29,050 for the base Blue trim or $31,650 for the SEL Convenience model. The range-topping Limited Hybrid is priced at $37,350.

Why buy it?
A complete redesign for 2022 gives the Tucson an eye-catching new look inside and out. Groundbreaking features, including the ability to inch forward and backward by remote control, help it stand out in a crowded market.