Acura has been on a roll lately as it overhauls its entire lineup to be more rewarding to drivers, including what the brand is calling its new flagship: the 2022 MDX.
It’s interesting that a supposedly driver-focused brand would apply the word “flagship” — a term Acura uses prominently and repeatedly to describe the MDX as its top-of-the-line vehicle — to a three-row, family-friendly SUV. If you want your brand to appeal to serious driving enthusiasts, a heavy, spacious, high-riding SUV isn’t a logical place to focus.
But that’s exactly what Acura did when redesigning the MDX for 2022. This all-new version seems to be built with driving feedback at the top of its priority list after many years of touting comfort, reliability and storage space.
The difference is stark, and it’s one you can see as well as feel.
For starters, the MDX gets a sharp new body. It mixes the visual DNA of a sports sedan with the practical, upright shape of an SUV, and I think the elongated hood and angular creases are a nice improvement.
My eyes are especially drawn to the new grille with its intricate, almost sculptural texture that seems to undulate like ripples in a pond. It’s striking, the kind of design that looks great in person but is hard to capture in photos.
The interior gets a similar improvement to make it more upscale and modern.
Solid construction has always been an Acura hallmark, although it’s easy to see where the Honda parts bin was raided in its past products. That bad habit still exists in the new MDX, but it’s harder to see, buried amid a beautiful array of soft materials, perfect stitching and supple leather. The the new MDX’s cabin feels more befitting of a premium brand than it ever has before. 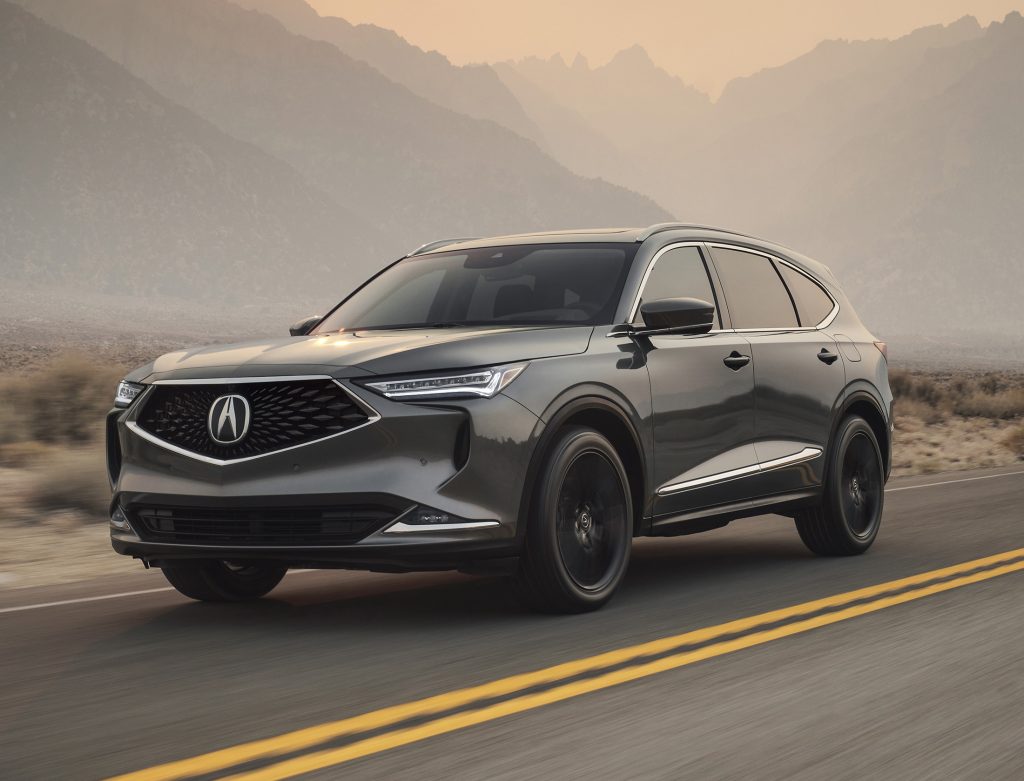 An elongated hood and angular creases make the all-new 2022 Acura MDX look more like a sports sedan and less like an SUV.

So does the way it drives.
With a fast, athletic feeling from the driver’s seat, this is one of the sharpest handling SUVs I’ve driven lately. It delivers sensations from the road better than most of its competitors, and its steering, brakes and engine all aim for the precise, communicative feeling of a sports sedan.
The new MDX retains and improves one of my favorite things about the old one: its responsive and smooth V6 engine. The newest version of Acura’s 3.5-liter V6 pairs nicely with its 10-speed automatic transmission, which — thanks in part to new active grille shutters that can close to reduce drag — help it earn a fuel economy rating of 26 mpg on the highway. That number drops to 25 if you opt for all-wheel drive.
If you’re skeptical about Acura’s new driver-focused mission, especially on a three-row SUV, consider this fact: they’re just about to release a Type S version of the MDX. That’s the label Acura has traditionally put on its aggressive, high-performance, hard-edged cars, and I look forward to seeing how well engineers and designers apply that formula to the brand’s biggest vehicle. 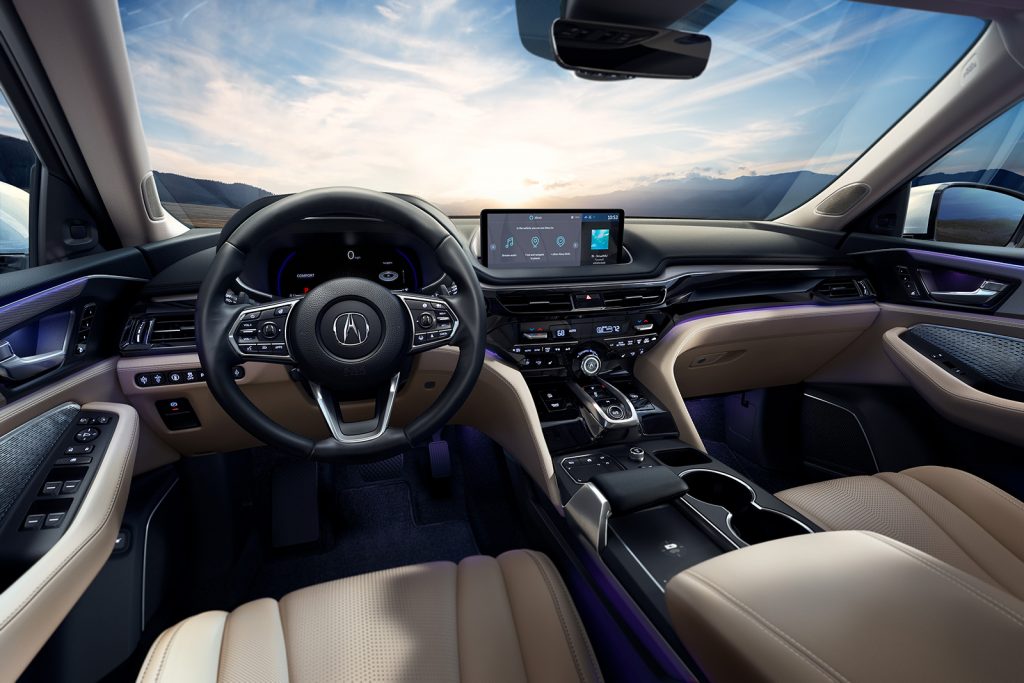 Acura puts technology front and center in the new MDX, including a fully digital gauge cluster behind the steering wheel.

This new-generation MDX is designed to put technology front and center, and it does a brilliant job of that for the most part. An all-digital gauge cluster is a great example of that, letting the driver easily customize the look and information on a 12.3-inch display behind the steering wheel. The location of knobs and buttons all seem well thought-out, feeling easy and natural to reach for all the commonly used controls.
There’s one notable exception, though. I found the MDX’s True Touchpad interface a bit fussy to use with Apple CarPlay in my tester. It seemed to work much better with Acura’s own infotainment setup and is a noticeable improvement over previous versions. Still, it makes me wish luxury car makers would abandon their touchpad interfaces for a simple, intuitive touchscreen instead.
Pricing for the new MDX starts at $46,900 with front-wheel drive. The all-wheel drive version starts at $48,900, and it tops out at $60,650 with the Advance Package.

Why buy it?
An all-new MDX focuses more on driving feedback than ever before. It’s designed for people who enjoy the feeling of the road but still want to be pampered in a luxurious, tech-filled cabin.