The Atlas is Volkswagen’s biggest, most Americanized vehicle to date.
Its roomy cabin, ample proportions, rugged shape and high seating position could easily be mistaken for a Chevy or Ford — or a Canyonero on “The Simpsons,” if you’re feeling cynical. It’s the stereotypical SUV, albeit with a noticeable German zing in the driving feel.
What I’m driving this week, though, isn’t a regular Atlas. It’s the Atlas Cross Sport, which trades the third-row seat for sportier looks. It seats five people, not seven as in the boxier Atlas, and gives you a sleek, sloping roofline and prettier rear styling in exchange.
In a way, the Atlas Cross Sport reminds me of the pricey BMW and Mercedes-Benz vehicles that try to blend coupe-like styling with SUV spaciousness. It’s not as posh on the inside or flashy on the outside as those German luxe rides, but it’s not nearly as expensive, either, ringing up at about half what the X4 or GLE Coupe do.
The base engine is a 2.0-liter, turbocharged four-cylinder, which is a fine engine in a small sedan, but its 235 horsepower is merely adequate in a big, heavy SUV like the Atlas. A better choice is the six-cylinder VR6 engine, which makes 276 horsepower. 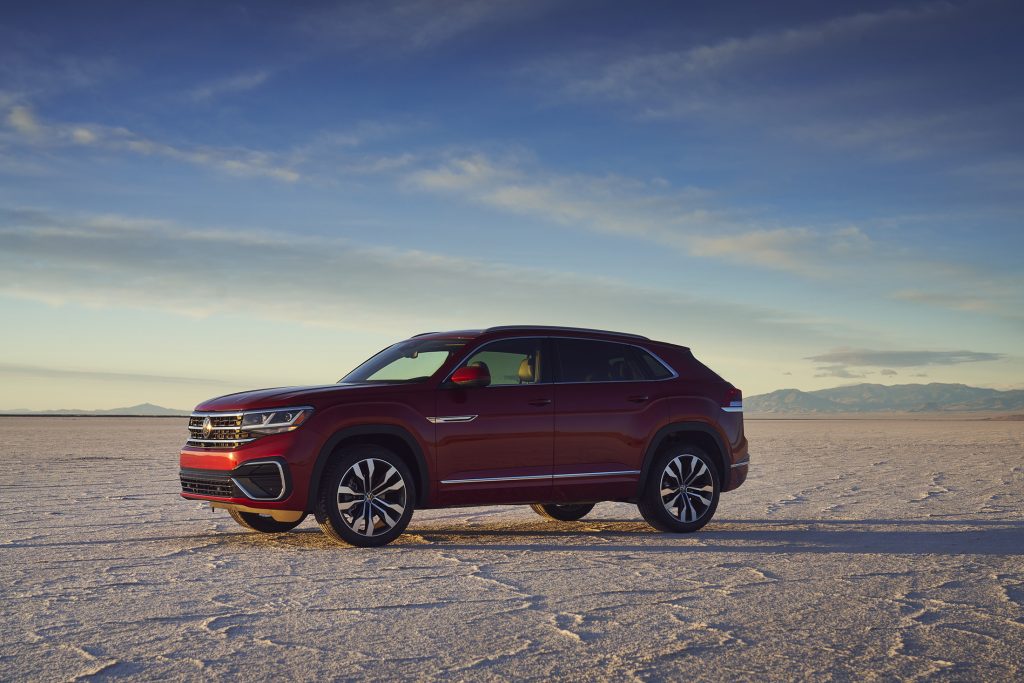 The 2021 Atlas Cross Sport has seating for five. It loses the third-row seat found in the regular Atlas, offering a huge cargo space and sportier, sloping roofline instead.

Highway fuel economy is 24 with the four-cylinder and 23 with the V6. Interestingly, that’s the same whether you choose front-wheel or all-wheel drive, so there’s not much tradeoff if you pick the V6 with AWD versus the four-cylinder with front-wheel drive, according to government testing.
This year the Atlas Cross Sport is available in a staggering eight trim levels that vary the equipment and the look, ranging from basic to premium and sporty to classy.
An improved version of Volkswagen’s digital interface, called MIB3, is new this year. It responds quickly to inputs and is designed to pair with smartphones wirelessly or through a USB or USB-C cable.
The Atlas Cross Sport is also taking another baby step toward autonomous driving with a new system called Travel Assist. When you press a button on the steering wheel, it uses adaptive cruise and lane-watching sensors to keep the car centered in the lane — and changing speed in traffic — with minimal driver input. It can even automatically change lanes when the driver commands it if equipped with VW’s Side Assist feature.
Still, the driver has to keep their attention on the road and hands on the steering wheel when Travel Assist is on. Capacitve sensors on the wheel ensure the driver is actually touching it, and the system will disengage if the driver doesn’t offer input. 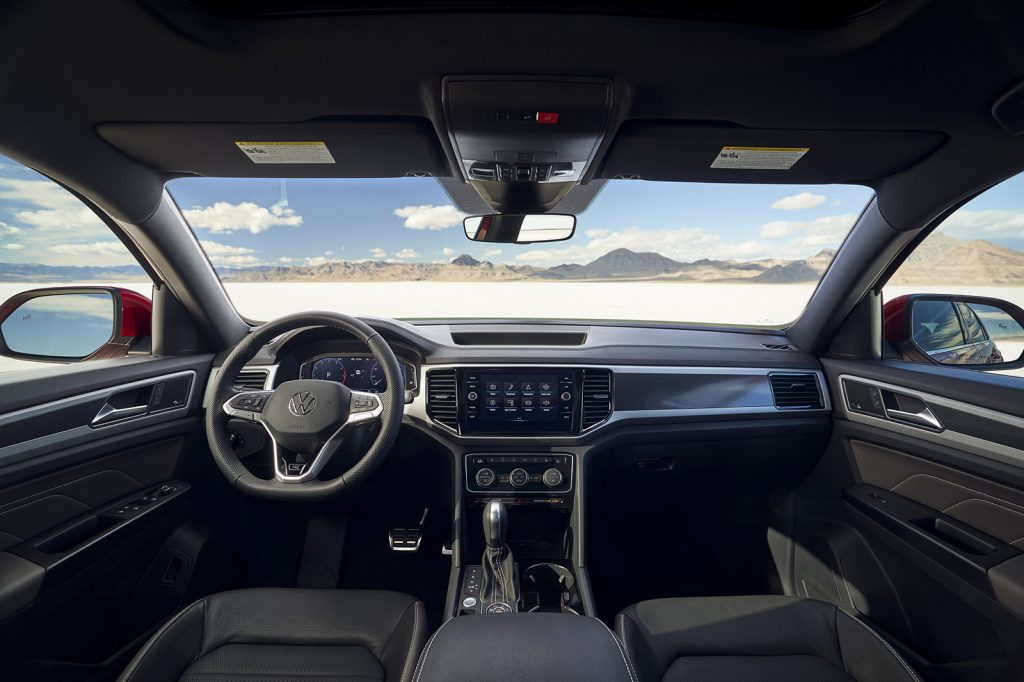 A revised version of Volkswagen’s digital interface, called MIB3, is one of the Atlas’ upgrades for 2021.

A closely related new feature, Emergency Assist, is also new for 2021. If the vehicle senses that the driver is incapacitated, it will automatically reduce speed and come to a complete stop in its lane. I can imagine this system saving lives in a medical emergency when a driver could otherwise unknowingly drive off the road while passed out.
Other than those new upgrades, the Atlas is keeping pace with the competition. It has the standard suite of safety and comfort features that all new cars seem to be offering, including Apple CarPlay and Android Auto, autonomous emergency braking, blind spot sensors and driver assistance systems.
What sets it apart is its spunky driving feel.
While most SUVs this large seem to float high above the pavement, the Atlas wants to connect the driver to the road. You get good feedback in turns and when parking, the sensation of a more direct connection to the wheels then in most three-row SUVs. It’s a major selling point to people who like than engaging, almost sporty feel from the driver’s seat.
Pricing covers a wide range. The two-row Atlas Cross Sport starts at $30,855 for the front-wheel-drive S trim, which is just $700 less than the three-row Atlas. Opting for all-wheel drive adds $1,900 to the cost.
The Premium R-Line trim tops the lineup at $50,025. Options include a V6 towing package for $550 and a panoramic sunroof for $1,200.

Why buy it?
It offers a lot of space for the money, plus Volkswagen’s signature zippy driving feel that’s unusual in vehicles this big. New driver assistance features make it smarter than before.