It’s been more than a decade since BMW spearheaded a new kind of vehicle that some people love and others find maddeningly illogical: the X6 Sports Activity Coupe.
Combining the high ride and galumphing weight of an SUV with the sleek, fastback styling and crisp handling of a sporty coupe, the X6 was among the first vehicles to crossbreed these two seemingly incompatible styles.
Its biggest upside is the eye-catching, polarizing look, something BMW tweaked in the all-new X6 that debuted last year. The new version is slightly wider, longer and lower, with the brand’s trademark kidney grille puffed up even larger than before.
BMW is rightfully proud of its grilles, which are among the few truly iconic design flourishes on today’s lookalike cars. In fact, it’s so proud that it gave the X6 an optional illuminated grille that lights the kidneys up when you lock or unlock the vehicle and turn on the daytime running lights.
The new X6 does a spectacular job fulfilling its luxury mission. The base version is impressive enough with its high-tech, feature-rich cabin and standard Vernasca leather seats. But some of the options sound like they could have come from a Rolls-Royce brochure, including a full Merino leather interior, a leather dash, colorful Sky Lounge lighting on the panoramic glass roof, and even heated and cooled cup holders. 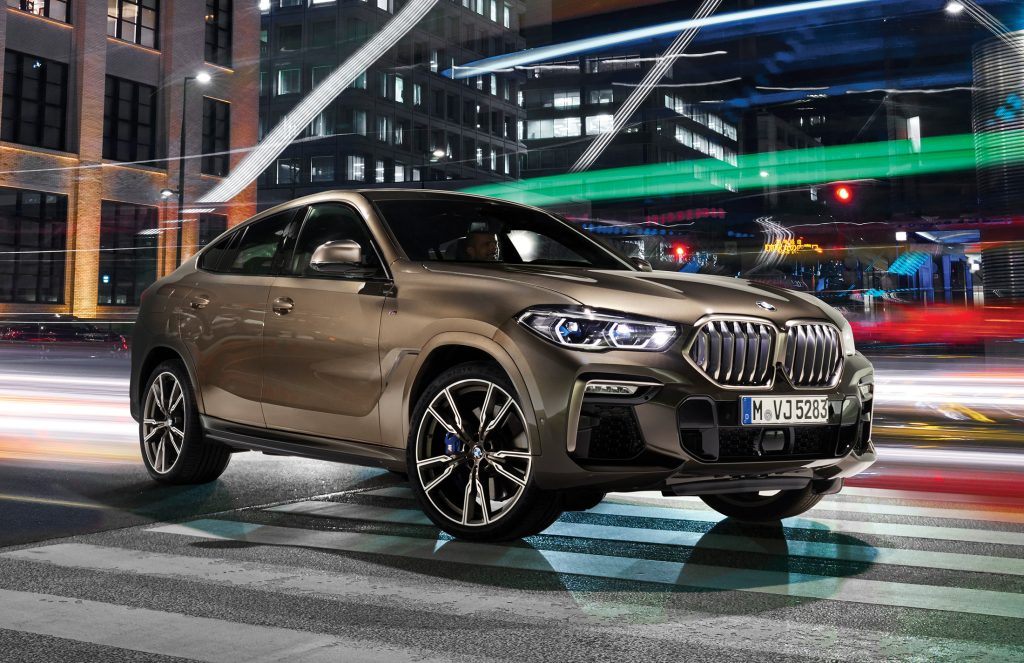 BMW’s X6 got an all-new design last year that is longer, wider and lower than before. Its sleek rear roof sets it apart from the more utilitarian, and less expensive, X5.

It still struggles with a serious problem with logic, though. Not only does the sloping rear roof dramatically cut into cargo capacity, but it also costs an extra $5,000 compared to the more traditional looking — and more cargo-friendly — X5. BMW is asking people to pay more money to haul less stuff, something that apparently makes perfect sense to Germans.
Interestingly, the X6 is an American car if you define that by where it’s assembled. It’s built in Spartanburg, S.C., along with the X3, X4, X5 and X7.
Its driving feel, though, remains as Teutonic as ever.
Everything about piloting the latest X6 can be described in one word: solid. It feels like it’s carved from stone, somehow extruded through a geologic process deep in the earth rather than stamped together in a factory. It’s heavy and purposeful.
At the same time, it somehow manages to feel athletic and light in corners. BMW’s engineers are experts in the black art of suspension design, and their magic skills seem especially noteworthy given the seeming impossibility of the X6’s mission: a weighty, high-riding, off-road-capable SUV that also dances through turns like a sports coupe. 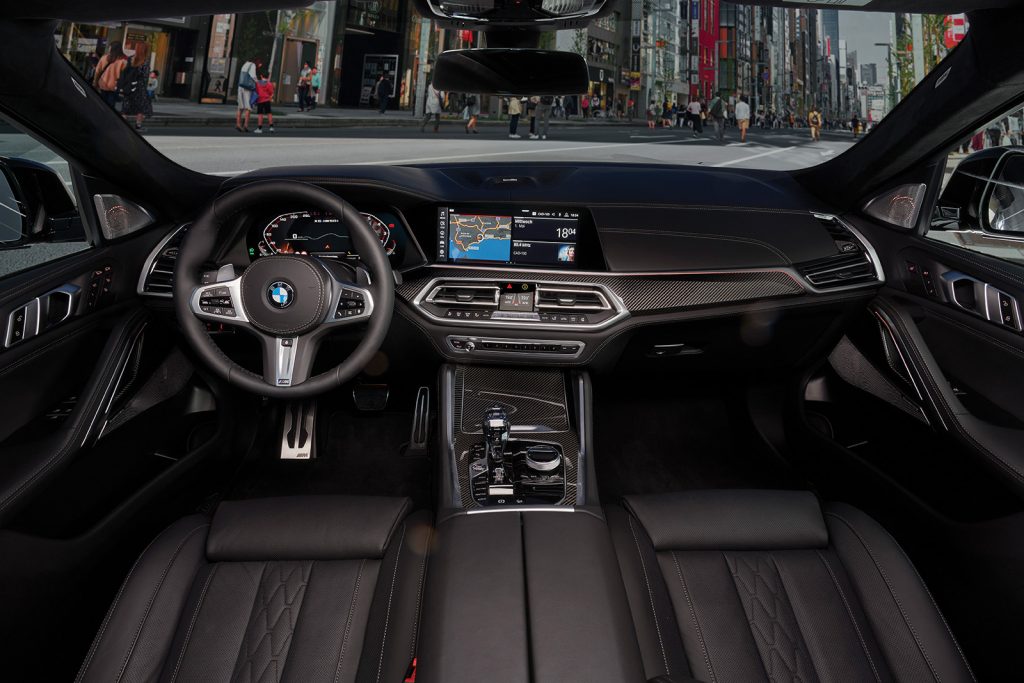 The X6’s redesigned cabin has a contemporary look that matches the eye-catching body. Its abundance of screens put all its extensive digital features within easy reach.

I’ll never understand how they make that happen, but they do.
Power comes from a turbocharged, 3.0-liter, inline six-cylinder engine. It makes 335 horsepower, which would seem like overkill for most brands. For a BMW, it’s just about right.
If you want to go even faster and can afford its hefty, $20,000 price premium, you can opt for a 523-horsepower V8 engine in the X6 M50i. It can accelerate from a standstill to 60 mph in just 4.1 seconds, BMW claims.
The new X6 also is available with an innovative feature I’ve never experienced before: Back-Up Assistant, part of the optional Parking Assistance Package on my tester.
Back-Up Assistant works by recording the vehicle’s path before you park, then playing it back in reverse when you activate it. It will automatically back out of the parking spot in the exact same way you pulled in, so all the driver has to do is look around and monitor the situation.
Pricing starts at $64,300, or $66,600 with all-wheel drive. The V8-powered M50i starts at $85,650.

Why buy it?
It blends the practicality of an SUV with the style and handling of a sports coupe. An all-new version offers spectacular performance and coddling luxury.