Some automakers are giving up on traditional sedans. Hyundai is doubling down.
Even when this Korean brand was focused on rolling out its roomy and spectacular Palisade SUV, it didn’t cut back on improving sedans like this: the new-generation Sonata.
The tactic flies in the face of competitors that are scaling back their car development to focus on more profitable trucks and SUVs, and it’s proof that the same manufacturer can build cars and crossovers equally well — if they have the commitment to do so.
The first time I drove this new Sonata a few months ago, I could sense that commitment in the groundbreaking features and sheer sophistication it exhibited over the road.
This week I’m driving a version that is, depending on what you’re looking for, potentially even better: the Sonata Hybrid.
Priced roughly $2,000 more than the gasoline-only Sonata Limited car I drove before, this week’s tester came with most of the same features but dramatically better gas mileage ratings: 45 mpg in city driving and 51 on the highway.
That highway figure is a whopping 42 percent higher than the turbo version’s 36 mpg.

The Hyundai Sonata has a fresh look for the new generation that launched this year. The hybrid version includes aerodynamic refinements to help it get better gas mileage.

Part of that impressive fuel economy is because a 39-kW electric motor helps boost it along, charged up by braking and a solar panel in the car’s roof. But it’s also because of a long list of thoughtful engineering touches to help it burn less gas.
It has active air flaps in the grille, alloy wheels shaped to be aerodynamic, covers and deflectors that smooth the air flow under the car and a bumper lip to make it extra slippery at speed.
If you want the best gas mileage, the Blue trim level boosts it even more. It’s rated for 50 mpg in the city and 54 on the highway. That last number bests its two chief competitors, the Honda Accord and Toyota Camry hybrids.
Aside from the fuel-sipping drivetrain, I was enamored with the same advanced feature set and comfy driving feel as in the gasoline tester.
The Sonata doesn’t pretend to be a performance car. It’s a soft-riding, relaxing, zen-like sedan to drive, and the hybrid drivetrain plays to those strengths. It accelerates with a buttery smoothness, and despite making just 192 horsepower, feels reasonably quick under full throttle.
I noticed two things that could be improved. 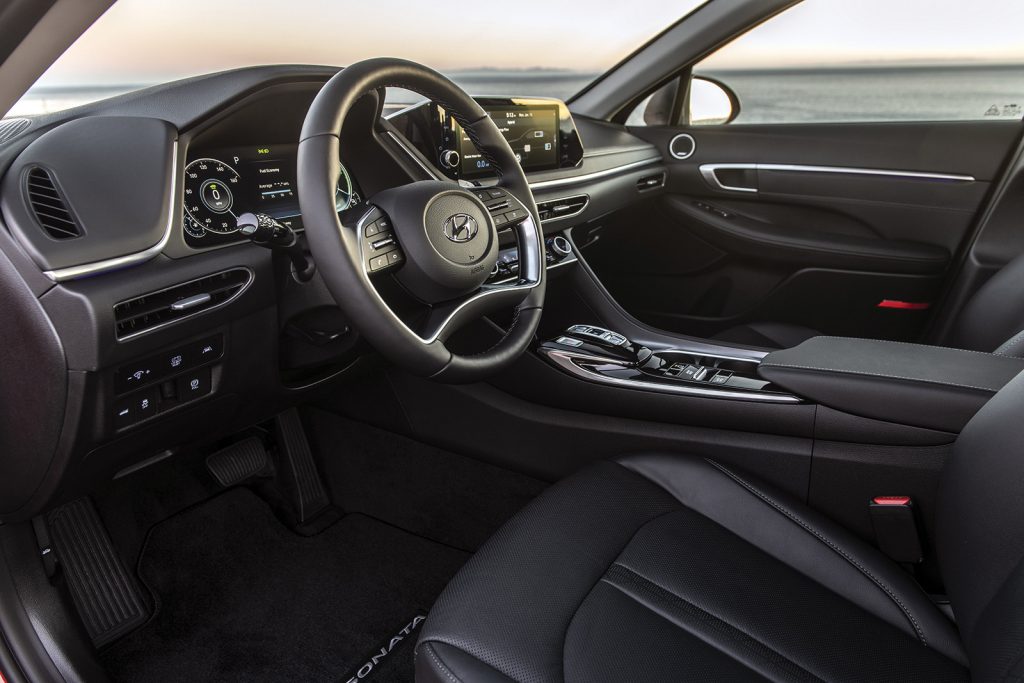 One, the brakes feel touchy at times, a common problem with hybrid cars that use the braking system to recharge the battery. It can be difficult to modulate the brake pressure and come to a perfectly smooth stop.
Two, oddly, you can’t get one of the most unique features of the new Sonata on the Hybrid version: Hyundai’s Smart Park remote parking system, which lets you control the car by remote control while standing outside it. The fact that the most high-tech Sonata is missing its most high-tech option is bizarre.
Pricing starts at $27,750 for the Blue trim, which is the most efficient. The more highly equipped SEL starts at $29,900, while the luxury-oriented Limited is priced from $35,300.

Why buy it?
The new-generation Sonata is stylish, comfortable and packed with nice content for the money. The hybrid version adds impressive gas mileage to its appeal.