Knowing a shiny car appears in my driveway with drug-dealer frequency, friends often ask what I’m driving this week.
I say, “a big, dumb crossover” all too often.
I know why most people love crossover vehicles. They’re spacious. They’re great for families. They offer a clear view of the road ahead, much like SUVs and pickups, while getting decent gas mileage. That’s enough to catapult them to the top of many shoppers’ lists in recent years, eclipsing the traditional sedan as the prototypical “family car.”
I still think they’re dumb.
Even the best crossovers for drivers — the Mazda CX-5 and CX-9, and anything from Porsche and BMW — would be even better if they rode lower to the ground to improve handling, at least in this enthusiast’s mind. They take otherwise incredible, spectacular, mind-blowing sports sedans and make them mediocre by jacking the suspensions up higher and styling them like cookie-cutter blobs.
Then there’s this one, the Alfa Romeo Stelvio Quadrifoglio.
The Stelvio already is the contrarian’s crossover, perfect for people like me who want cars to be interesting and exciting, not dull transportation appliances. It looks stunning and original, and driving it is a sensual experience — something I loved about the Stelvio TI Lusso tester I raved about last fall.
Even its name sounds like the tragic hero in a Puccini opera. The audience sniffles and wipes their tears when Stelvio gasps his last breath. 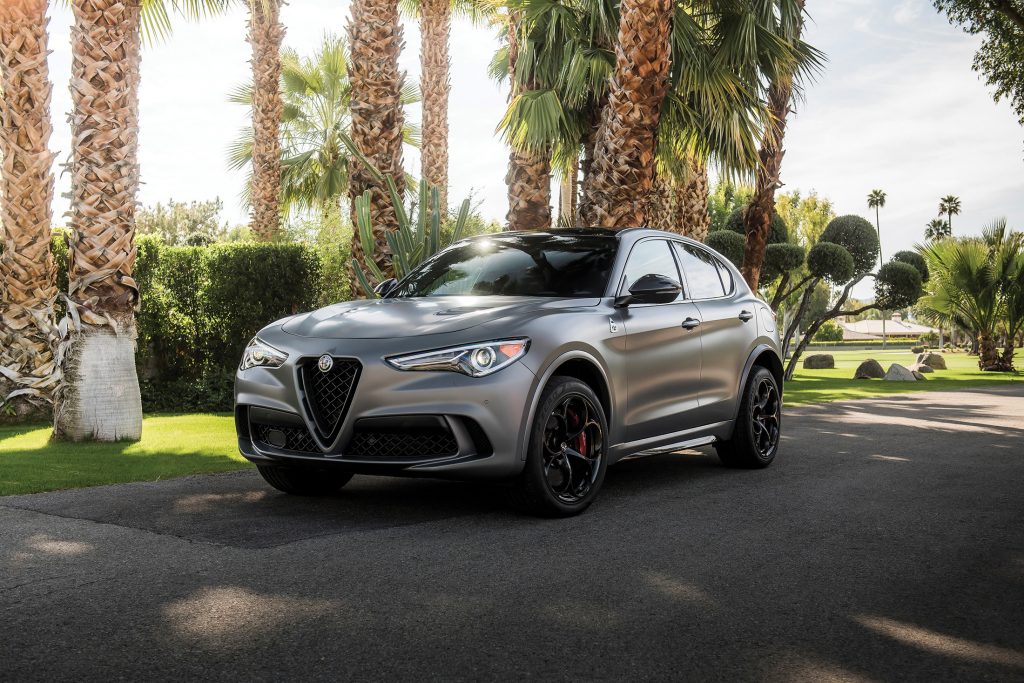 A four-leaf clover badge on the front fender is the most obvious symbol that this Alfa Romeo Stelvio is something special: a rare, fast and exciting Quadrifoglio model.

The Quadrifoglio version, though, cranks the operatic drama up to 11. It takes what is already a breathtaking crossover and makes it more engaging, better looking and — of course — much, much faster.
A twin-turbocharged engine makes 505 horsepower. That’s impressive, but nowhere near as splendid as how it sounds while getting up to speed. Its exhaust is simply magnificent, better than any sports sedan I’ve ever driven. It’s not so much a deep roar or American-style rumble as it is a herald trumpet announcing that something fast and sexy is imminently arriving.
No other crossover sounds anything like it, and outside of a few exotic, obscenely expensive supercars, nothing on the road is as aurally thrilling.
Granted, some people will think the Quadrifoglio is obscenely priced. The Lusso I drove last time started around $45,000, which seems like a bargain. I’ve tested a lot of pricier SUVs that aren’t nearly as rewarding.
The Quadrifoglio version, though, starts just under $80,000. Its price, just like its otherworldly performance, is located deep in dream-car territory for most people. 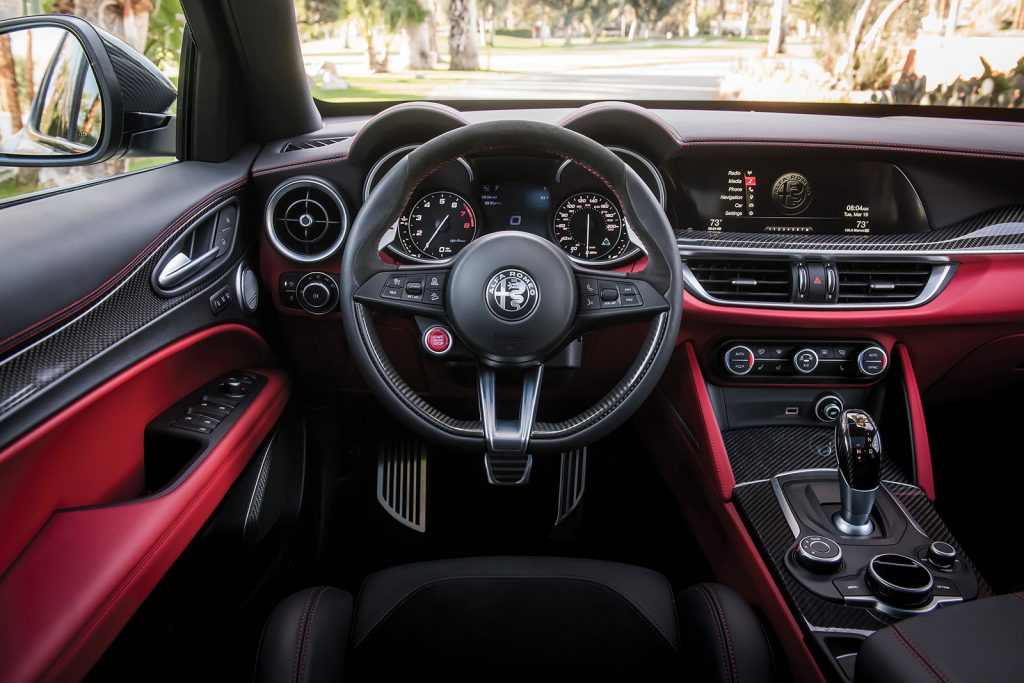 A red interior seems fitting in this Italian performance car. A start button on the steering wheel makes the 505-horsepower, twin-turbocharged V6 roar to life.

Options and a hefty $1,595 destination charge pushed my tester’s total price up to $94,190. The biggest add-on, by far, was an extra $8,000 for carbon ceramic brakes that — as such track-day brakes always seem to do — squeak loudly when they’re cold. Aficionados understand that’s a small price to pay for unfading brake performance on the racetrack, but drivers who plan to keep their fast Alfa on the street might be better served with the standard brakes. They’ll keep your ears and neighbors happier.
I could review the interior, with its nicely styled lines and upscale materials, but that would be wasting your time. Just like the highway ride and spaciousness in a Miata, no one cares.
Instead, owning an Alfa is all about the unmistakable style and invigorating driving experience, something that borders on the spiritual in the brand’s best products. And this high-performance Stelvio is one of their best.
As a whole, the Stelvio Quadrifoglio deserves an award for “most enjoyable crossover I’ve ever driven,” beating out the much pricier Porsche Cayenne Turbo in my imaginary trophy cabinet.
It’s not dumb. It’s sensational to look at, even more sensational to drive, and more sensational still to hear at full throttle.

Why buy it?
It offers dream-car looks, speed and sound. It’s an absolutely stunning vehicle to drive, and it happens to have crossover-vehicle practicality as a bonus.