Volkswagen is expanding into new markets — quite literally — as it continues to roll out its biggest vehicle in the United States, the aptly named Atlas.
Large, family-friendly vehicles remain wildly popular, and this spacious, three-row SUV is carrying the weight of profitability on its shoulders. Volkswagen is investing heavily in electric vehicles for the future, but gas-fueled vehicles like the Atlas are actually paying the bills — at least for now.
After driving it for a week, it’s easy to see why.
My Atlas tester came in the base S trim, a bit unusual because media loaner cars typically come loaded with options. This one, though, shows off just what a value case the Atlas makes with its starting price under $32,000, including the delivery fees.
Considering the average transaction price for a new car rose to nearly $36,000 last year, the Atlas can deliver above-average roominess and practicality for below-average cost. And it does so with surprisingly few drawbacks.
With Apple CarPlay, or Android Auto for people using Google devices, even the base Atlas provides a high level of connectivity when you plug in your smart phone. Aside from leather seats, I didn’t feel like I was missing out on much from higher-priced trims. 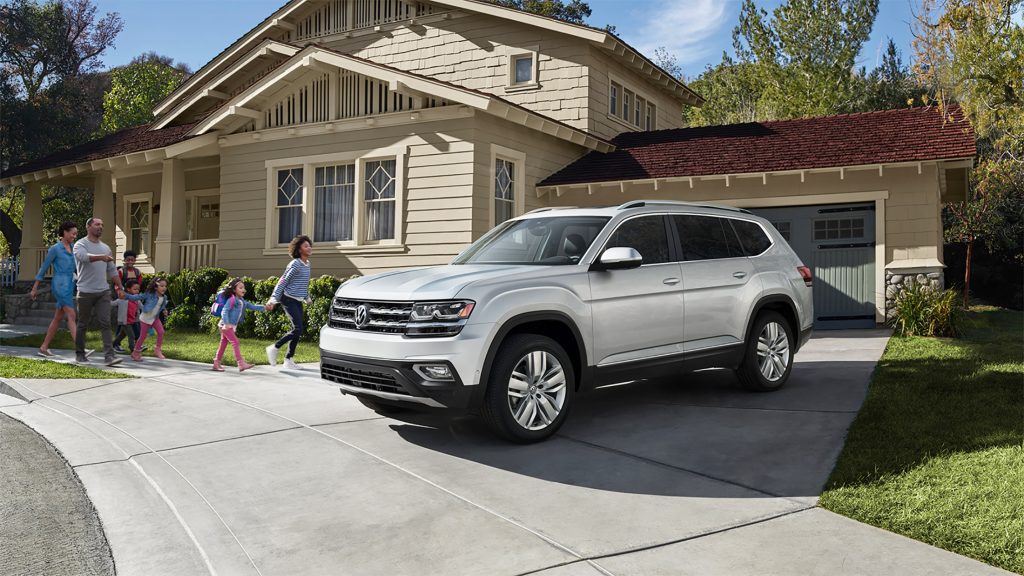 Built in Tennessee, the Atlas is Volkswagen’s biggest vehicle for sale in the United States. It’s smartly designed for American families, including lots of storage compartments, cup holders and charging ports for mobile devices.

Should you feel the need for more power or pampering, V6 models start at $34,095, while the loaded SEL Premium tops out the pricing at $48,395.
The Atlas is a good buy in terms of space, practicality and features for the money. It has a voluminous feel in the cabin that almost rivals full-size SUVs, with decent knee and head room even in the back row. It also has spectacular handling for such a big vehicle, making it feel like a smaller car from the driver’s seat.
If Volkswagen cut corners to deliver a low price, you can see the result in two areas: power and interior materials. It feels like it’s made from many of the same bits and pieces as VW’s lower priced models, and neither engine choice will deliver thrilling acceleration.
My tester, with its 2.0-liter, four-cylinder engine, felt underpowered when merging onto freeways. I suspect the V6 would be a much better fit for this car, but even the small four-cylinder can merge confidently if you’re willing to mash the gas pedal early enough.
With the V6 engine and proper equipment, the Atlas is rated to tow a respectable 5,000 pounds. It also has a generous 18.7-gallon fuel tank that results in long periods of time between fill-ups.
With the smaller engine, gas mileage is rated for 20 mpg in city driving and 26 on the highway. The V6 drops those figures down to 17 and 24. 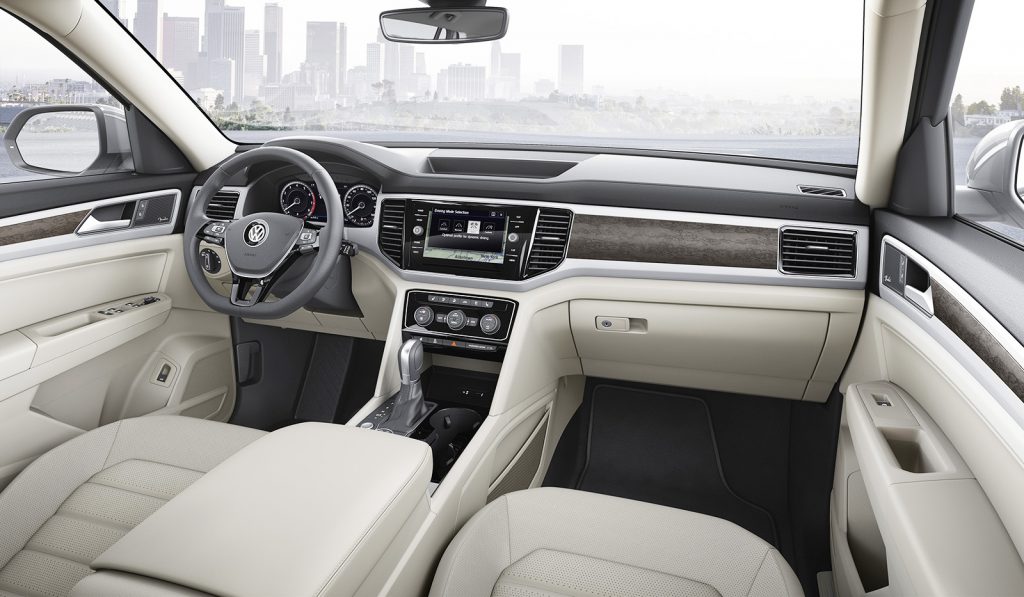 he Atlas has three rows of seating for up to seven people. It’s spacious enough to rival some full-size SUVs in room and comfort.

While the Atlas feels nicely tuned for driving on the pavement — offering a good balance between comfort and sportiness — it’s also available with the sophisticated 4Motion all-wheel-drive system to help with traction in a variety of conditions, including some off-road settings. You can even personalize the transmission, steering, engine and hill-descent feeling to your preferences in the “Custom Offroad” driving mode.
My favorite thing about it, though, is how American it feels. It looks, drives and is branded like a German car, but it’s actually built in the United States for real ‘Mericans.
Need proof? Count the cup holders. There are up to 17, depending on how you configure the cabin.
Same thing with its power ports and storage bins. Conveniently placed USB and 12-volt power outlets, along with storage nets and cargo containers, mean contemporary American kids can be themselves: addicted to devices and surrounded by their stuff.
It’s the quintessential American family car from the quintessential German car company, a fun combination.

Why buy it?
With three rows of roomy seating and a generous cargo area, it’s spacious enough to feel indulgent for families. It drives like a smaller car, though, with a zippy, energetic feel for something so large.