Never before have I driven a car that mixes two extremes — wildly exotic, yet comfortably familiar — as well as this one.
It’s the Acura NSX, the modern-day pinnacle of what Honda engineers are capable of creating when they decide to crossbreed supercar performance with the levelheaded logic of an Accord.
So much about this car screams “exotic,” from the spaceship styling to the jet-like whirr of its twin-turbocharged V6 that is shoehorned, like any proper exotic car, behind the driver’s back.
Its performance is as heart-stopping as its price, starting at $157,500.
It feels like a bargain, though, if you compare its braking, max cornering G-forces and acceleration to the Audi R8 V10, Porsche 911 Turbo or McLaren 570S, all of which carry higher starting prices.
But enough about bargain hunting. What’s it like to drive?
Stepping up to an NSX is intimidating, especially if you know the numbers this machine is capable of achieving. It accelerates from a standstill to 60 mph in a neck-snapping 2.9 seconds, for example, thanks to the powerful V6 and electric motors working in harmony. 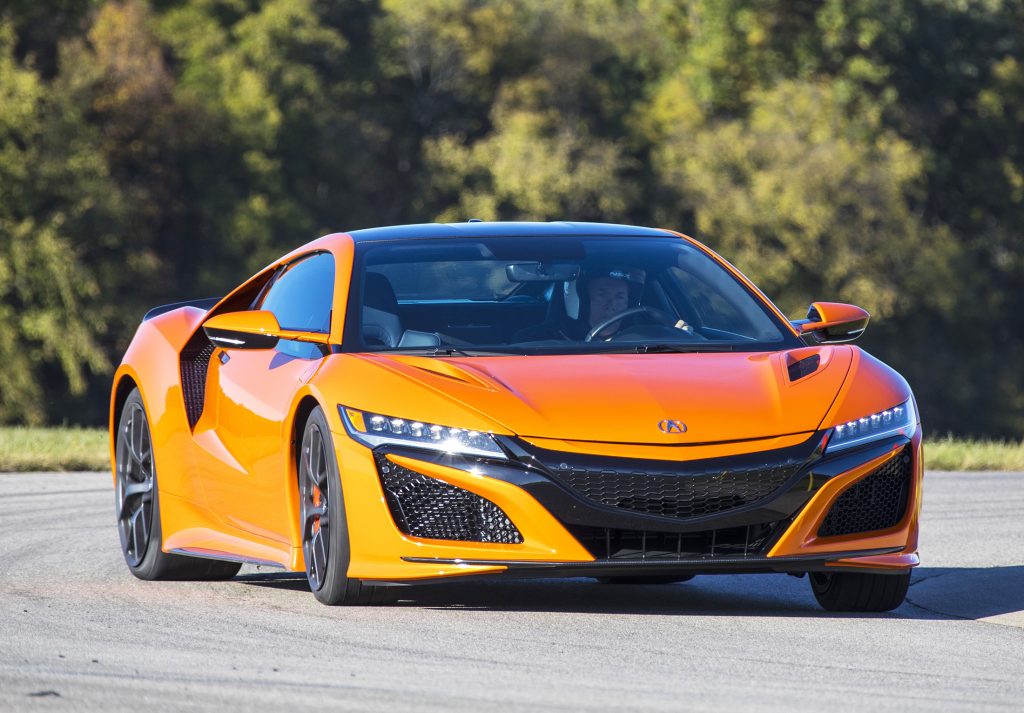 The Acura NSX puts a twin-turbocharged engine behind the driver’s back, then adds two electric motors for more speed.

Actually doing that — mashing the gas pedal to the floor and seeing what happens — makes the whole world feel different.
What seems impossible in normal cars becomes not just possible, but effortless, in an NSX as the outside world flashes by in a blur. Your brain has to recalibrate the physics of driving.
If its straight-line speed blows your mind, just wait ’till you see what it does in a corner.
With all-wheel drive, true torque vectoring that can route power to each of the four wheels as needed, and a low-slung, mid-engined design that somehow makes it seem as if all this car’s weight is buried underground, it feels unbelievably quick and sticky in turns.
It’s the closest I’ve ever come to experiencing “if you think it, you can do it.” The NSX responds faster than my mind can process.
Still, as intimidating as it is to slide into this machine, it took only a few minutes of driving before I felt perfectly at home behind the wheel. That’s in sharp contrast to most high-performance cars that leave me feeling sheepish and terrified even after significant seat time.
By supercar standards, the NSX is a friendly labrador puppy. 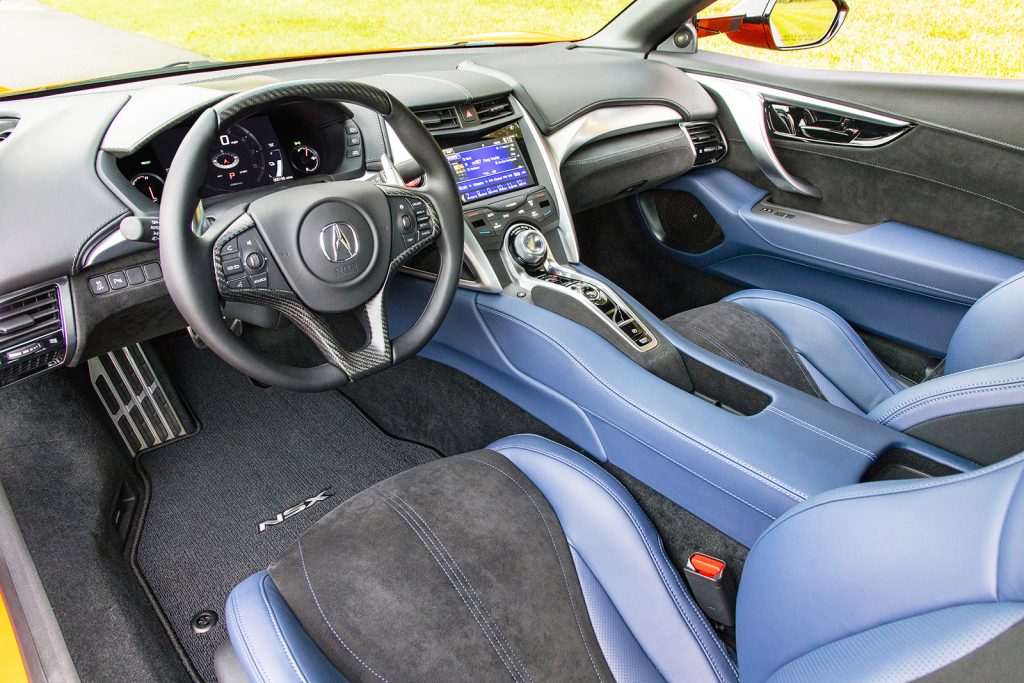 For a car that looks and drives like an exotic supercar, the NSX’s interior is comfortable and familiar. While the seats are much lower to the ground than most, it has the recognizable driving position and controls from more common Honda products.

Part of that is by design, with the stability of AWD traction, fantastic forward visibility and plenty of electronic guardian angels in place to prevent — or at least discourage — dumb mistakes.
Part of it is also because the NSX makes heavy use of the Honda parts bin. Its perfectly designed ergonomic layout, easy-to-use switches and even its infotainment system, although not Honda’s latest version, are all things you’d recognize from a morning commute in a Civic or Accord.
From a design perspective, that’s brilliant. There’s no need to mess with cabin layouts when Honda and Acura cars have them dialed in so perfectly after many years of refinement.
From the perspective of wanting to drive something special that justifies the price, it’s not as smart. It doesn’t feel as bespoke and finely handcrafted as it could.
Overall, though, the NSX accomplishes its mission in a first-rate way. Just like the original, it’s a supercar that you can drive every day.
And after spending a few days with it, it makes me wish I could wake up with one in my driveway all the time.

Why buy it?
The NSX offers supercar speed with the comfort and confidence of a daily driver. It’s an extremely high-performance car you can live with, if you can afford it.