The Kia Soul started out with lots of boxy competition. Through the years, its square-shaped rivals — the Honda Element, Scion xB and Nissan Cube — have all died off.
You could say it’s the Soul survivor.
Kia is hoping to parlay its success into an all-new third generation model built for a world with very different competition: no longer Kleenex boxes on wheels, but small crossover vehicles that look like rough-and-tumble SUVs.
Despite its completely new design, this new-generation Soul — available starting as a 2020 model — remains very familiar inside and out.
Kia uses words like “funkier,” “quirky” and “unconventionally styled” to describe it, and they’re right. There’s nothing else that looks quite like it, which is noteworthy at a time when compact sedan sales are tanking and lookalike, cookie-cutter crossovers are booming. 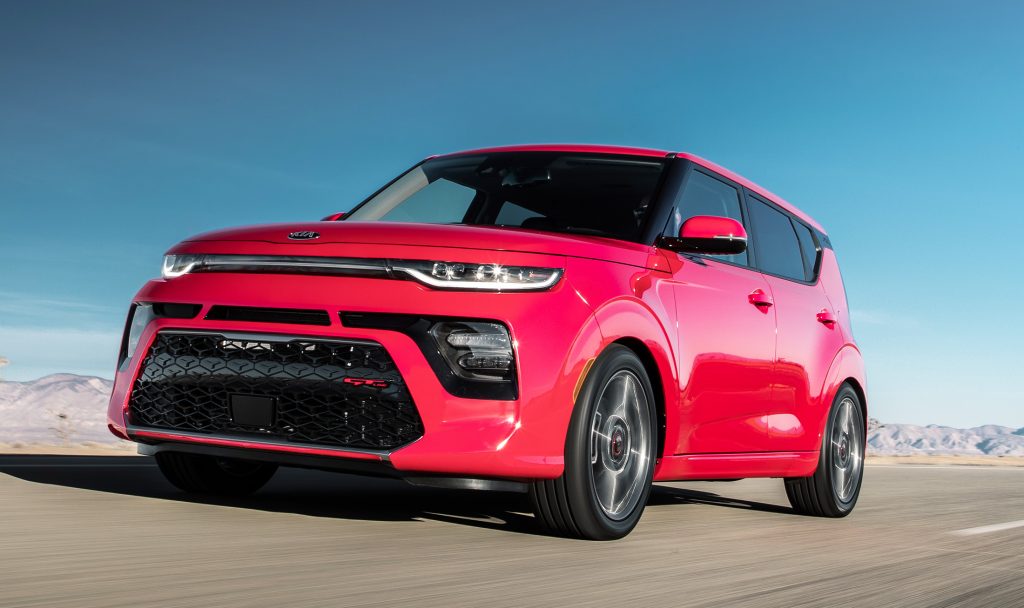 The Kia Soul, the only box-on-wheels vehicle available today, is returning with an all-new third generation for 2020. It cranks its unusual styling up to 11 while offering more practicality at the same time.

In fact, I’m pleasantly surprised that Kia resisted the urge to make the new Soul look more bland like the glorified hatchbacks that are selling so well lately. Its headlights are squintier and front end more menacing, cranking the “funky” knob up to 11.
Usually, the more interesting a car looks the more impractical it becomes, as is the case with low-slung coupes that utilize sexy rear rooflines that crowd rear headroom and limit visibility out the back window. That looks great but functions terribly.
The Soul, though, with its utilitarian boxy shape becoming an integral part of its oddball DNA, manages to be both easier to use and easier on the eyes at the same time. The rear lift gate is lower to the ground now, for example, and it offers more cargo carrying capacity than before thanks to slightly longer dimensions — with the extended length helping it to look more sleek and haul more stuff.
Inside, the new Soul follows the same theme as its body: more of the same.
Unusual textures and shapes help it stand out. I was especially surprised at the bold use of patterns and colors on the door panels.
Music has always been an inspiration for the Soul’s interior designers, and that’s still the case with the all-new third generation. Those shapes and textures that are so unusual were inspired by the visualization of music, Kia’s designers say. 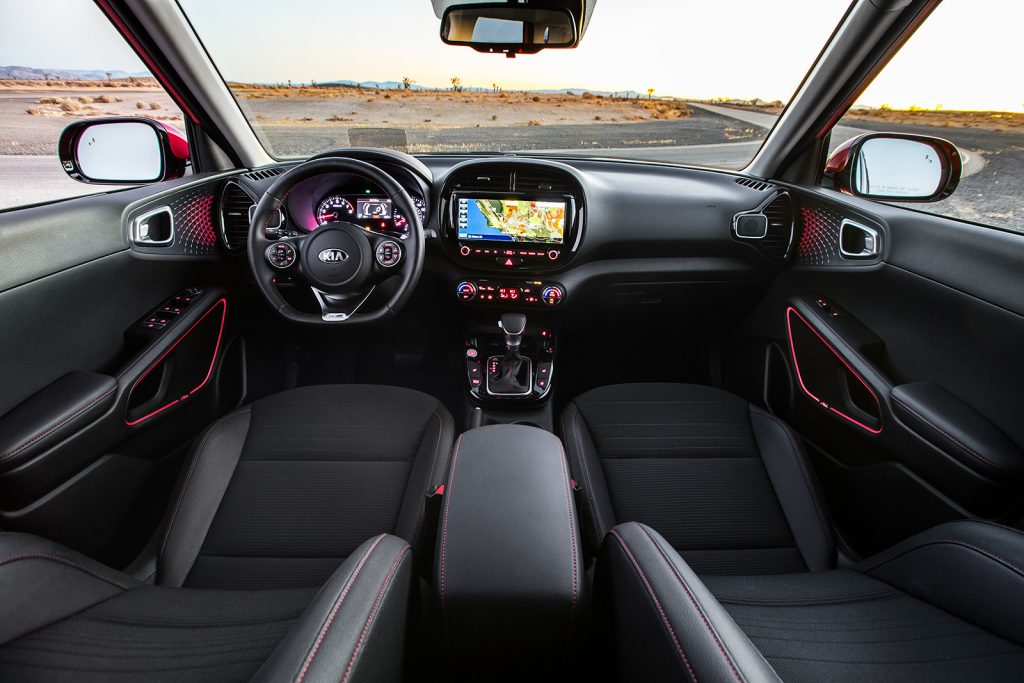 The new-generation Soul’s interior has a bold design to match its funky body. Shapes and textures are inspired by visualizing music, its designers say.

One feature takes that quite literally. “Sound mood lighting” uses soft, gentle lights in the cabin to change in sync with the beat playing on the sound system, giving the interior space a hint of a dance-club vibe. You also can customize the color choices to suit your mood and taste.
In my week-long test drive, Apple CarPlay worked flawlessly on the Soul’s 10.25-inch touchscreen, which delivered a quick response and was simple and intuitive to use. An optional 8-inch heads-up display (HUD) keeps information front and center without the driver’s eyes needing to stray from the road.
Two four-cylinder engines are available: a naturally aspirated 2.0-liter that makes 147 horsepower, or the one on my tester, a 1.6-liter turbocharged engine that makes 201 horses.
Kia made a gutsy choice to switch to a continuously variable transmission (CVT) for the 2020 Soul, something that can improve fuel economy but often results in a less engaging driving experience — historically a standout quality of the Soul. As long as you don’t mash the throttle, the Soul’s new transmission responds quickly and feels similar to the old six-speed automatic on the previous generation.
If you floor it, you’ll get the disappointing CVT drone, but at least it’s quieter and slightly faster than the outgoing model.
Fuel economy is rated at 35 mpg on the highway and 29 in the city with the 2.0-liter engine. With the turbo, it’s still respectable, rated at 27 and 32 mpg.
Pricing starts at $17,490 for the base LX trim and ranges up to $27,490 for the sporty GT-Line Turbo.

Why buy it?
It’s more practical than ever but still keeps its funky, lovable driving personality and style.