Subcompact crossover vehicles didn’t exist until a few years ago, but these days they’re rapidly replacing tiny sedans and hatchbacks as the most popular entry-level vehicles in America.
Now Hyundai is jumping into the fray with the Kona, a small vehicle that looks like an SUV, is priced like an economy car and slots below the Tucson on the showroom floor.
For the most part, the Kona follows the same formula as the Honda HR-V, Toyota C-HR, Chevrolet Trax and their kin: start with a short-wheelbase car, raise the ride height, add a lift gate and fold-down seats in back for cargo, toss in a dash of beefy SUV styling, and voila! Your brand’s sales get a boost because that’s what today’s buyers want.
The Kona takes things a step further by offering a few things its competitors don’t always make available. It comes standard with Apple CarPlay and Android Auto, offers a choice of two different engines, and, above all else, has spunky styling that doesn’t blend in like road-going camouflage.
I’m glad Hyundai offers a choice of engines, something many competitors don’t. While most vehicles in this class give you a lone four-cylinder, usually underpowered engine as your only choice, the Kona has two available. 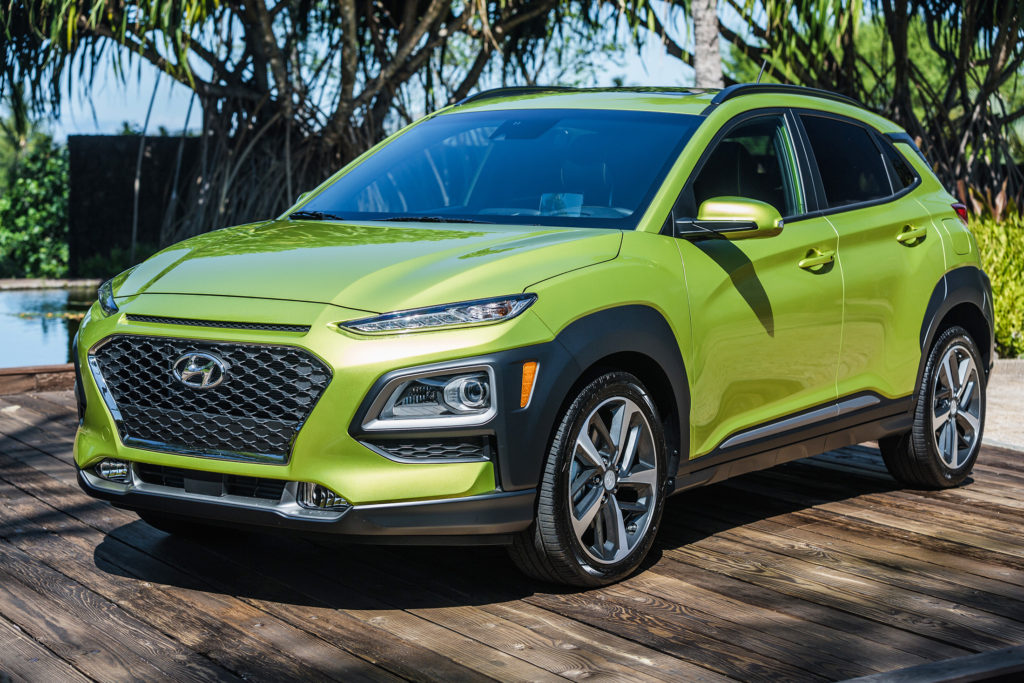 Aggressive styling makes the Hyundai Kona, an all-new model for 2018, stand out among an increasingly packed crowd of competitors.

Base models come with a 2.0-liter, naturally aspirated engine that makes 147 horsepower, while the high-content Limited and Ultimate trims get a turbocharged, 1.6-liter, 175-horsepower engine.
Even more notable is the turbo engine’s 195 pound-feet of torque at just 1,500 RPM, something that makes it feel dramatically quicker and more responsive.
Its handling also is among the best, rivaling the Mazda CX-3 for driving enjoyment. It stays relatively flat in corners and offers communicative steering and brake feedback. That sportiness comes at the expense of highway smoothness, though, where it feels a bit rougher than others in this class.
With one notable exception, it follows the typical Hyundai playbook of offering enticing features at every price level. You can even get it with unusual content like a heads-up display that most of its competitors don’t offer.
The exception is adaptive cruise control. I was surprised to see that useful and increasingly common feature isn’t available at any price level on the Kona.
On the outside, this is one of the most aggressively styled vehicles in its class. Big, contrasting-color wheel arches, a sleek hood, swept-back headlights and dramatic rear styling make it catch your eye from every angle. 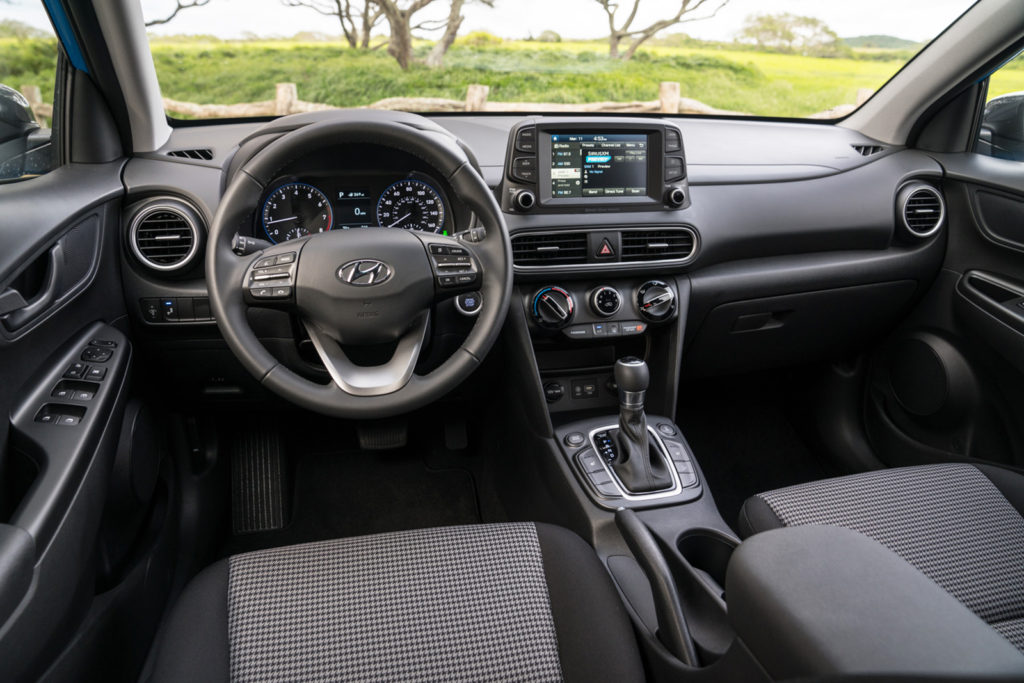 Inside, it’s not quite as adventurous. The base models feel mundane inside, at least compared to the striking body that surrounds them. Higher-end trims can get lime green accents that pop visually, something I think makes them much more appealing.
The cabin feels well designed and comfortable for front-seat passengers, especially the driver. Controls are all easy to operate, intuitive and natural feeling, a testament to Hyundai’s ergonomic experts who are outdoing the Japanese at their old game.
The back seat is better for children than adults, though, something true of every vehicle in this class. Rear cargo space is also limited when the seats are up.
Pricing starts at $19,500 for the SE trim with front-wheel drive and a six-speed automatic transmission. All-wheel drive is available on all trim levels, topping out with Kona Ultimate at $29,680 with all-wheel drive and a seven-speed, dual-clutch automatic transmission.

Why buy it?
The Kona combines eye-catching looks, an SUV-like layout and economy-car pricing. Its optional turbocharged engine is the best in this class.