If sports coupes rarely sell in big numbers, why do car companies build them?
More than anything else, it’s to make a statement. And Infiniti is practically shouting bout innovation and style with its sexy, two-door Q60.
This is a car that makes a visual statement, first of all, setting the tone for the entire Infiniti brand with its sleek lines and deeply sculpted curves.
The basic proportions are classically beautiful with an elongated hood, raked-back roofline and large, 19-inch wheels tucked right at the corners.
In the details, though, Infiniti’s designers get more adventurous.
For an unusual touch, the C-pillars have a crescent shape that dramatically lunges forward. Combined with angular LED headlights, an inset grille and scooped-out character lines on the sides, the Q60 exudes a sense of motion from every angle.
Even more than the way it looks, though, this car creates a halo for Infiniti in two other areas: technology and performance. 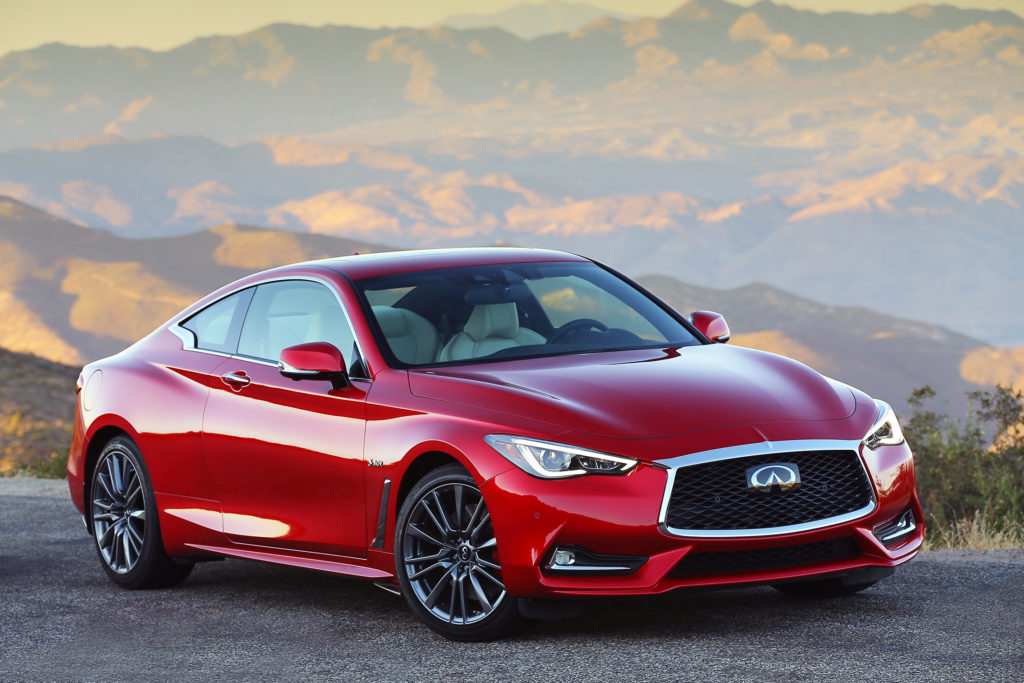 The Infiniti Q60 is one of the most eye-catching sports coupes on the market today.

The high-performance version I tested, called the Red Sport 400, delivers 400 horsepower to its extra-wide rear tires via a 3.0-liter twin-turbocharged V6. It’s phenomenally fast, as you’d expect with that much power on tap, but it also delivers its force to the pavement brilliantly through curves.
A major reason for that is the Dynamic Digital Suspension, which comes standard on both the Q60 Sport and Red Sport 400. It lets the driver adjust the firmness of the suspension between the relatively compliant Sport mode and the noticeably firmer Sport+.
An innovative steer-by-wire system, called Direct Adaptive Steering, can transmit input from the driver to the front wheels even faster than a traditional mechanical linkage, Infiniti claims.
In addition to the range-topping, 400-horsepower model, the Q60 is also available with a 208-horse turbocharged four-cylinder engine or a 300-hp V6.
All versions of the Q60 are available with either rear- or all-wheel drive.
Inside, Infiniti tries to mix two philosophies: traditional craftsmanship and heavy technology.
For the most part, the mixture works, with an artistic sense of design that matches the outgoing body and tech that’s omnipresent but never too intrusive. 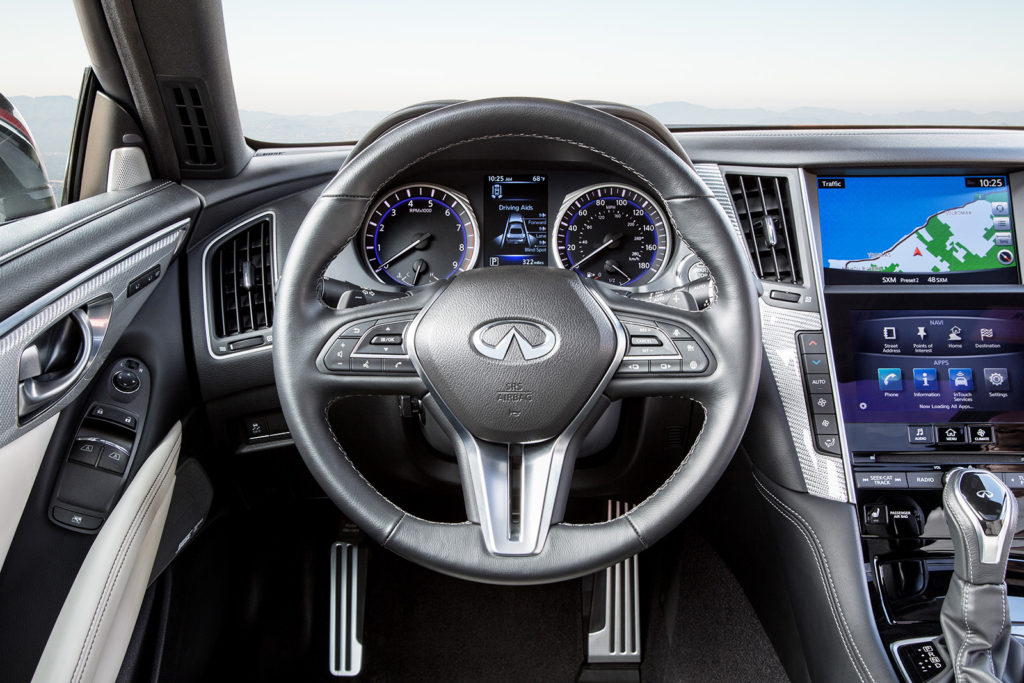 The Q60 brings INFINITI’s powerful design language into the sports coupe segment with remarkable success, with its daring curves, deep creases, and flowing lines intensifying its low, wide, powerful stance. The look is progressive and modern, yet dynamic and moving.

The center stack is dominated by two touchscreen displays — 8 inches on top and 7 inches on bottom — that combine to keep all the vehicle’s functions within easy reach. I also like how it doesn’t force you to use the digital screen for simple tasks. Commonly used features like changing the radio station and volume all have their own dedicated, old-fashioned buttons and knobs.
It’s also impressively quiet inside thanks to good sound insulation and active noise cancellation that comes standard on all models.
Pricing starts at $38,950 for the base Pure trim, $44,300 for the Luxe version with the 300-horsepower V6, and $52,000 for the Red Sport 400.
All-wheel drive adds $2,000 to the price on all models.

Why buy it?
It’s stunning to look at and offers eye-popping performance for the money, especially in the powerful, range-topping Red Sport 400 trim.