The Jetta has long been Volkswagen’s most popular car, and this year VW makes the process of picking one a bit simpler.
For 2017, the Jetta is available in just four trim levels — S, SE, SEL and GLI — ranging from around $18,000 to $29,000. The flavor you pick will depend on how fast you want to go and how comfortably you want to arrive.
At the bottom end, the S trim offers basic but spunky-to-drive transportation, powered by a 1.4-liter, 150-horsepower engine. It’s the best pick for fuel misers, with an EPA rating of 40 mpg on the highway.
The mid-grade SE, priced at $21,995 with an automatic transmission, adds some of today’s most popular features, including a smartphone connectivity system, keyless access, push-button start, and a blind-spot monitoring system with sensors that detect cross traffic when in reverse.
For a more luxury oriented experience, the SEL adds a bigger engine — 170 horsepower from a 1.8-liter, four-cylinder powerplant — along with a power driver’s seat, chrome trim, automatic dual-zone climate control, navigation and adaptive cruise control. It’s priced a hair under $25,000. 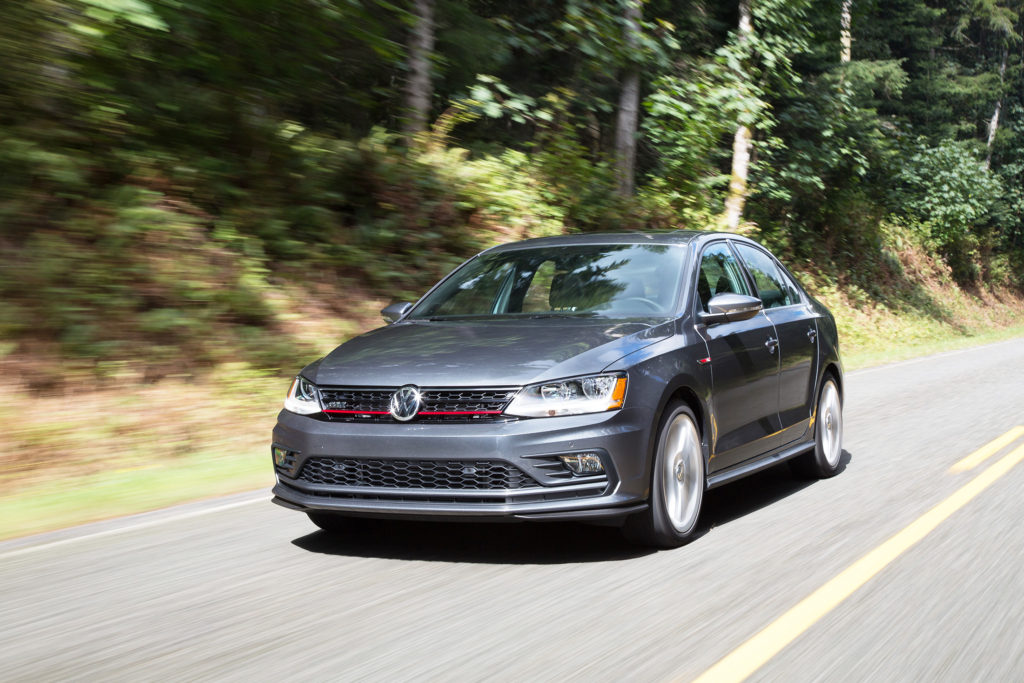 Clean lines give the Volkswagen Jetta an unassuming but contemporary look on the outside. The Jetta is now available in a simplified lineup with four trim levels: S, SE, SEL and GLI.

The version I tested, though, is the cream of Jetta’s crop: the sporty and powerful GLI with its 2.0-liter, 210-horsepower engine, 18-inch wheels and a long list of amenities.
I have no complaints about the drivetrain in the GLI. It offers plenty of torque, muscular acceleration both from stoplights and at highway speeds, and quick, precise shifts from its six-speed automatic transmission — something at which German cars always seem to excel.
There are two things I’ve love to see VW improve on this car, though.
One is the styling, both inside and out. While I like the subtle red accents on the GLI trim, it’s one of the few distinctive things that set this car apart from, say, a Hyundai or a Honda. I’d love to see it become more unique and creative, which is something I say about most sedans, to be fair.
And two, it seems to have lost some of the zippy personality that defined the Jetta for many years. By the numbers, in terms of power and fuel economy, it’s the best Jetta ever. It checks all the right boxes and, especially in the GLI guise, is a blast for the driver. But it lacks something very difficult to pin down that previous generations of this car had in abundance: endearingly peculiar panache.

The Jetta’s cabin mirrors its European style body, with straight lines and a clean, modern layout that borders on minimalism.

Aside from those admittedly subjective gripes, the Jetta gets all the basics right, which is why it’s such a perennially popular car.
Ample knee and hip room, generous trunk space, well-placed controls and a reasonably quiet cabin make it a practical and enjoyable way to drive around.
Another plus worth mentioning is my tester’s Fender-branded audio system, jointly developed with Panasonic, that blasts 400 watts of power through nine speakers and a subwoofer in the trunk that generate clear, clean, potent sound even at high volumes. It’s a great sound system to crank up loud.
Finally, the 2017 Jetta was rated a Top Safety Pick+ by the Insurance Institute for Highway Safety when it’s equipped with the optional forward collision warning and autonomous emergency braking. That’s peace of mind for any buyers who prefer to continue living.

Why buy it?
It’s Volkswagen’s top-selling vehicle for a good reason. It offers practical, comfortable transportation at a value-oriented price point.