It’s been more than a year since Kia replaced the sharp-looking Optima with the even sharper, better handling K5.
The K5 does exactly what every car company ought to be doing to keep their four-door sedans relevant in the crossover era: make them sexier looking, more fun to drive and more fuel efficient, then pack them full of nice features for the money.
Kia deserves major kudos for actually investing in cars when the market’s appetite for SUVs seems insatiable. At a time when some brands are dropping sedans from their lineup, Kia smells an opportunity for winning sales by actually investing in traditional cars.
The K5’s sleek roofline, near-luxury cabin and crisp, sporty handling combined to make my drive more enjoyable than any crossover I’ve tested in the last year.
My GT-trim tester came with the bigger of two turbocharged, four-cylinder engines available in the K5. With 290 horsepower from 2.5 liters of displacement, it regularly leaves the front tires scrambling for grip, my one and only complaint in an otherwise beautifully engineered new car.
The tires really need to be stickier. Buyers shouldn’t have to spring for a new set as soon as they leave the dealership, but it’s almost a necessity in this car. 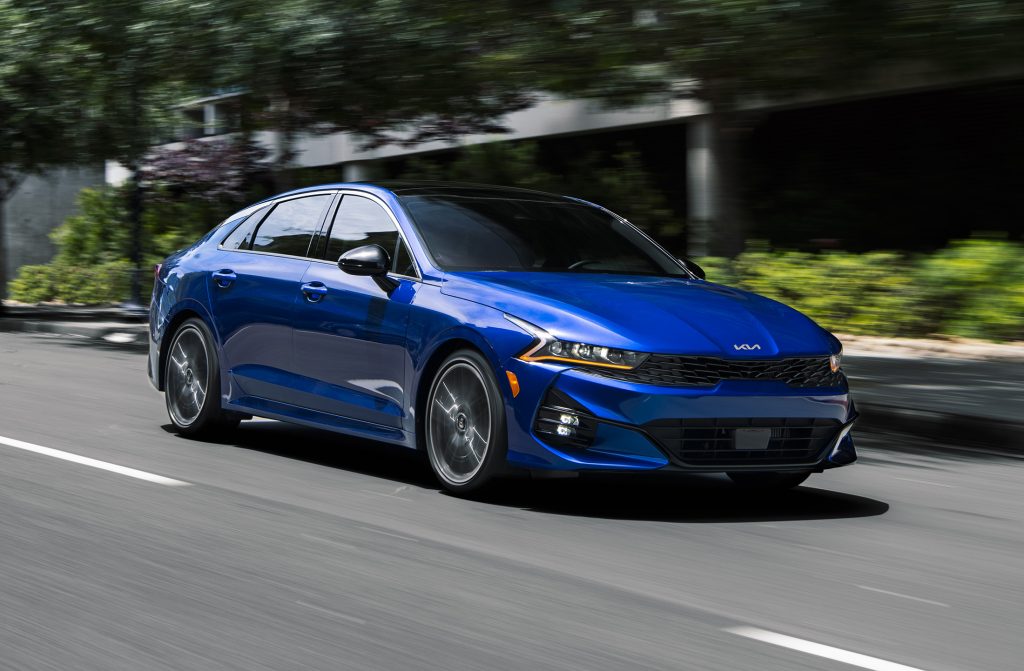 Introduced last year, the sharp-looking K5 replaces the Optima sedan in Kia’s lineup. It’s styled like a sleek hatchback, but the design cleverly hides a traditional and spacious trunk.

Tire-spinning isn’t as pronounced with the base engine, which makes a decent but uninspiring 180 horses.
Highway fuel economy is outstanding with both engines, an increasingly important selling point for traditional sedans as gas prices stay high. The base engine is rated for 37 mpg on the highway, while the bigger engine in the GT model gets 32 mpg, a remarkably good number for such a powerful car.
Like the deceased Optima, the K5 can be outfitted luxuriously enough to shock people who still think of Kias as cheap economy cars. The chestnut brown interior in my tester wouldn’t seem out of place in an Audi or Mercedes with its abundance of soft-touch surfaces and masterfully designed digital interfaces.
The K5 integrates technology as well as any car built today. Not only can it link to smartphones via Apple CarPlay and Android Auto, which should be a bare necessity these days, but it does so seamlessly and with just the right combination of physical buttons and touchscreen features. It strikes a perfect balance, neither forcing you to wade through gobs of digital menus and submenus, nor cluttering up the dash by sprinkling redundant buttons all over. 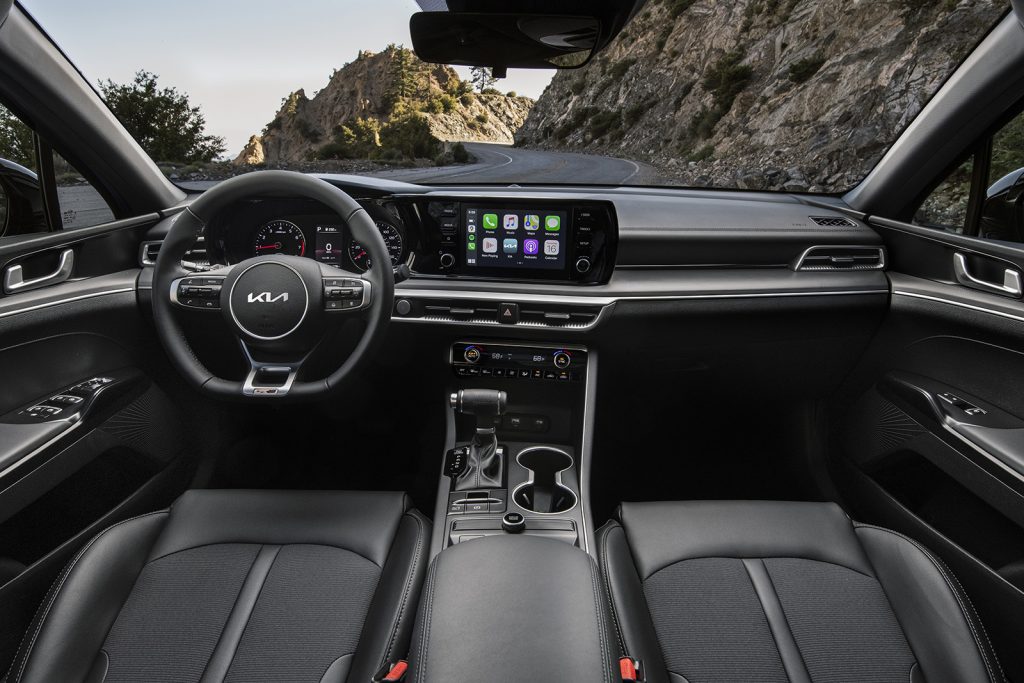 The K5’s cabin mimics the polished look and soft feel of luxury car brands. It’s impressively roomy and packed with a lot of features for the money at every price point, living up to Kia’s bang-for-the-buck reputation.

For people still thinking about buying a crossover, there remains a question: how practical is the K5 for families?
While it’s styled to look somewhat like a hatchback, including a sharply sloped roofline that slightly impedes head room in the back seat, it’s actually got a bigger-than-average trunk for storage space.
Not only does it have 16 cubic feet of storage volume, but the wide, low trunk opening makes it easier to load groceries and luggage than in a high-riding SUV or crossover. I also crammed three near-adult-sized teenagers in the back seat without complaints, and they fit more comfortably than they would have in a lot of two-row SUVs.
In short, the K5 makes sense for a lot of buyers if they’re willing to give it a chance. It’s gorgeous, efficient, practical, comfortable and — perhaps most importantly — far more enjoyable to drive than those high-riding SUVs.
It’s proof that sedans need investment, not abandonment.
Pricing starts at $23,790 for the base LX and tops out at $31,190 for the GT, which is oddly available with front-wheel drive only. You can get all-wheel drive with the smaller engine starting at $26,590.

Why buy it?
The K5 is beautifully designed inside and out. Its cabin is classy enough to pass for a luxury car, and its modern body is among the best-looking sedans available at any price.