It was the year of Michael Jackson’s “Billie Jean,” the final episode of MASH and Darth Vader finding redemption in “Return of the Jedi.”

It turns out that 1983 was a landmark year for Toyota, too, with the launch of the 4Runner SUV.

To celebrate the milestone, the 2023 4Runner is available in a 40th Anniversary Special Edition that pays homage to the 1980s off-roader with eye-catching retro stripes.

It gets bronze wheels, special stitching, badges and some other unique bits, too. But it’s that yellow, orange and red stripe that stands out like Mr. T’s mohawk on this special edition, wrapping from the roofline all the way to the front grille.

Toyota is limiting the production to 4,040 units, fittingly enough.

Aside from reminding us 40-something drivers how ancient we are, there’s not much to dislike about this classic Toyota SUV, assuming you buy it for what it’s designed to do: serious off-roading.

You can get more comfortable vehicles with better gas mileage by choosing a crossover instead. Toyota makes a lot of good ones. 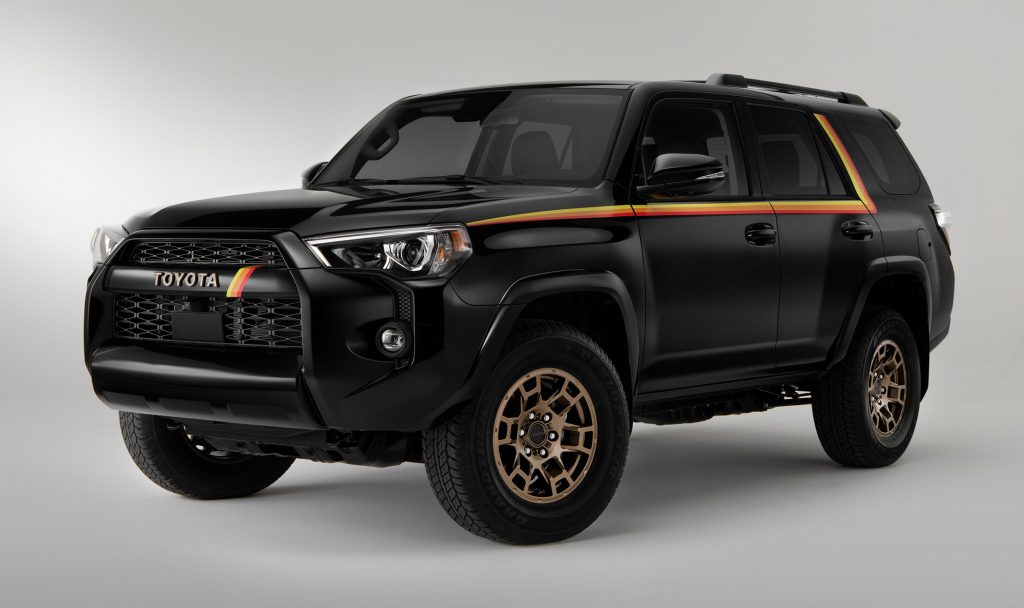 Toyota is celebrating 40 years of the 4Runner with this 40th Anniversary Special Edition model for 2023. Its 1980s-style stripes are eye-catching.

What set the 4Runner apart from the beginning, though, is the fact that it’s a legitimate, body-on-frame truck built for serious off-road adventures. Crossovers look the part, but the 4Runner is the real deal.

Its stout frame is designed to take a beating on trails, plus it has the added benefit of delivering a comfortable ride.

The 4Runner is powered by an equally stout, 270-horsepower V6 engine. Still, it can’t mask the fact that this is a portly SUV that requires heavy gas-pedal stomping to bring it up to freeway speeds. It would benefit from Toyota’s buttery turbocharged engines that power the latest Tundra and Sequoia.

You can also feel its truck-based roots in the way it handles. It feels meaty and ungainly with a stiff suspension that constantly reminds you it’s built for a purpose, and that purpose isn’t cushy softness.

On the flip side, it has 9 inches of ground clearance in the two-wheel-drive version and 9.6 inches on the 4×4, perfect for its rock-climbing mission.

Personally, I think buyers should ignore the two-wheel-drive version because it defeats the main purpose of driving a 4Runner. People who don’t need four-wheel drive could get dramatically better gas mileage and comfort in a Highlander. 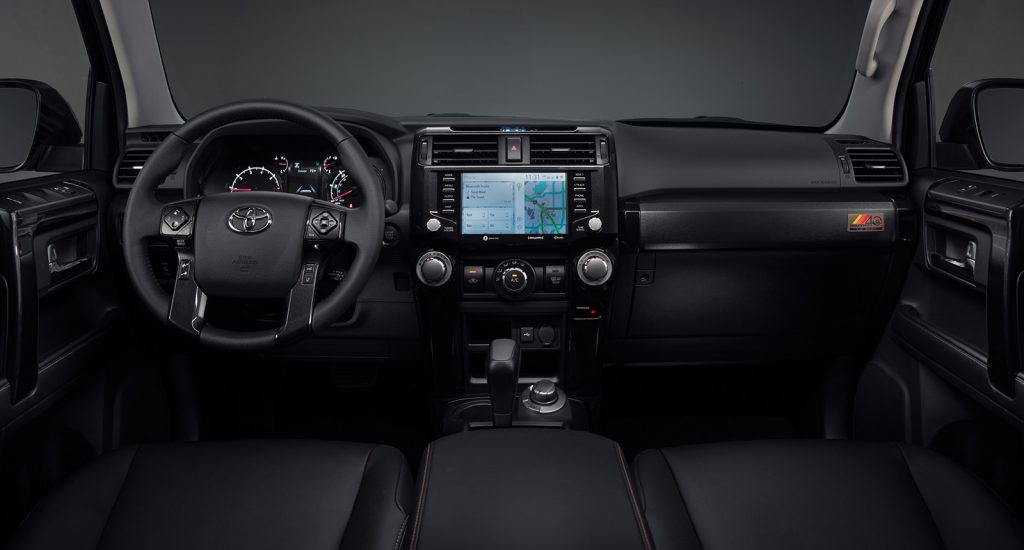 The 4Runner offers two kinds of 4×4 systems. The standard version uses active traction control to sense wheel slippage and deliver power to the wheels that still have traction. It also has a two-speed transfer case that lets you drop it into low range for extreme situations.

The 4Runner Limited gets a different 4×4 system that uses a Torsen limited-slip locking differential. For even more capability, the TRD Off-Road and TRD Pro versions offer crawl control, Multi-Terrain Select and special cameras to let you see obstacles on the trail.

Why buy it?
The Toyota 4Runner remains a beast on the trails with a strong frame, sophisticated 4×4 system and outstanding ground clearance. It’s a good choice for people who need more off-road capability than the popular car-based crossovers can deliver.

This week I’m driving one of America’s most audacious and controversial new vehicles, the all-electric Ford F-150 Lightning pickup.

I recognize that most people reading this have already formed their own opinions before I write a word about it.

If you think it’s a monumental achievement in engineering and a showcase of American ingenuity that points to where tomorrow’s automotive industry is headed, you’re absolutely right.

If you think it’s an expensive eco-tech experiment that can be frustrating to use and is outperformed by cheaper gas- or diesel-powered trucks, you’re also absolutely right.

After driving a Lightning for a week and experiencing firsthand all the highs and lows of a battery-powered truck, the overwhelming feeling I have is one of polarization, perhaps more than any other vehicle I’ve driven in two decades of weekly test drives.

On one hand, the F-150 Lightning is phenomenal to drive. It’s even quicker than the mind-bending Raptor, has a cabin with Rolls-Royce silence and can provide power to an entire house after a natural disaster. It’s absolutely brilliant. 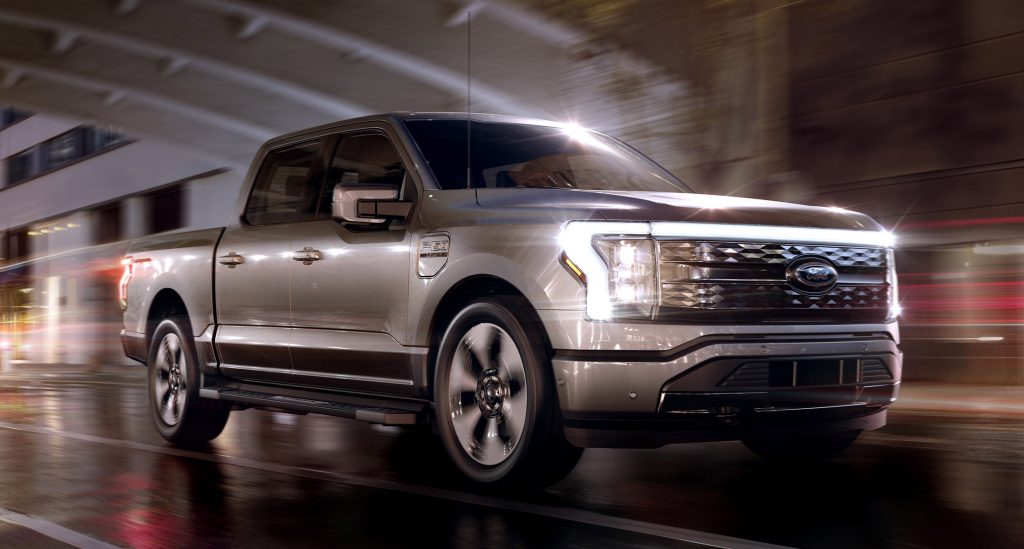 The Ford F-150 Lightning is an electrified version of America’s most popular vehicle. It has a maximum range over 300 miles and is unbelievably quick, but it also faces challenges in a country that seems mired in the early stages of transitioning to EVs.

On the other hand, it’s an electric truck in a country that is woefully unprepared for EVs.

Searching for functional fast chargers on long drives this week made me thankful for the Lightning’s excellent sound insulation that prevents passersby from hearing all the curse words that are being shouted inside it.

It also has another obvious downside: it’s not that great at truck stuff.

While the F-150 Lightning is rated to tow an impressive 10,000 pounds when you check the right boxes, its real-world range is dramatically shortened when hauling loads. Motor Trend’s testing showed a range of just 115 miles with a light trailer, 100 miles with a middleweight load and a measly 90 miles with a heavy trailer.

For everyday driving, though, there’s no truck I’d rather be in.

It’s hard to find superlatives strong enough to accurately describe how great this truck feels from the driver’s seat.

It’s so fast, so silent and so comfortable that it makes me wonder why anybody would want to commute in a gas-powered truck ever again.

And assuming the owner keeps it charged up in their garage every night, it also eliminates the biggest downside of pickups. You don’t have to spend a fortune on gas or waste time at the pump filling it up.

As much as the “weak at truck stuff” downside bothers me, the “never go to the gas station” upside makes me want one. 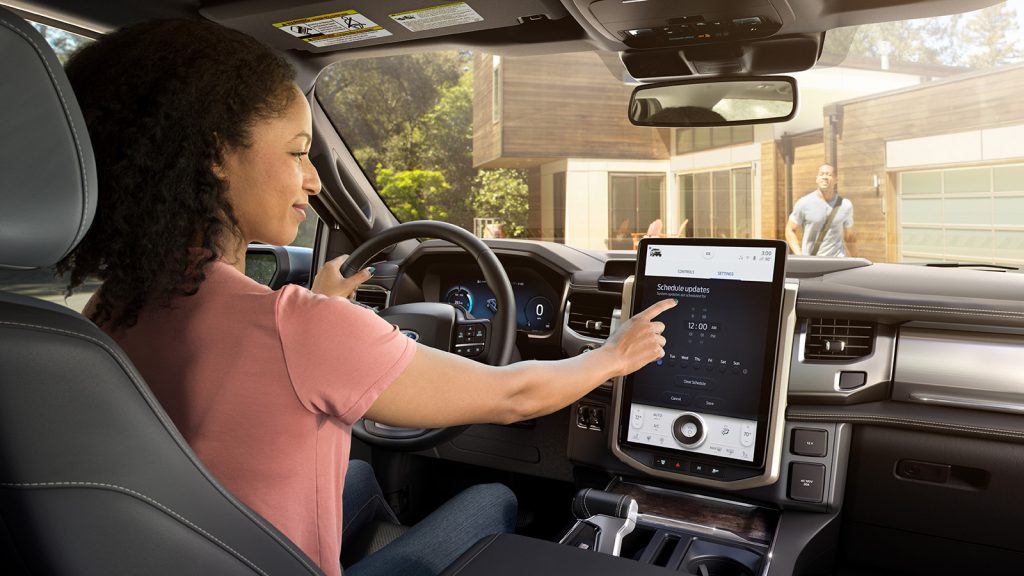 For the right driver in the right situation, the F-150 Lightning makes a lot of sense. It’s an amazing vehicle to drive on its own merits, even if you sidestep all the claimed Earth-friendly selling points.

With a max range of more than 300 miles and the ability to help your friends move furniture and pick up big loads of mulch at Home Depot in the spring, it does the job I suspect 90 percent of light-duty pickup drivers need. And it does so without burning a drop of gasoline.

At the same time, with restrictive towing range limitations and an acute lack of DC fast charging infrastructure in today’s America, it’s clear that internal combustion isn’t going away soon, either.

Why buy it?
It’s an all-electric version of America’s most popular vehicle. It’s incredibly quick, whisper quiet and still useful for “truck stuff.”

You have to squint to see the differences, but they’re real.

Mazda recently released the 2023 CX-50 crossover, an all-new vehicle that’s roughly the same size and shape as the longstanding CX-5.

Oddly enough, Mazda isn’t replacing the CX-5 with the newer, shinier thing. It’s continuing to sell the CX-5 alongside the CX-50, which gives buyers the ability to pick between slightly different flavors in the hottest part of today’s automotive landscape.

That also may create some confusion on the showroom floor.

It’s not like the CX-5 is woefully out of date. It looks and drives a lot like the CX-50, still crisp and modern, despite being built on a different platform.

The CX-50 is slightly lower and wider, something you typically want in a sleek sports coupe. At the same time, it’s styled to look more rugged and SUV-like with its black fenders and wider C-pillar in back. 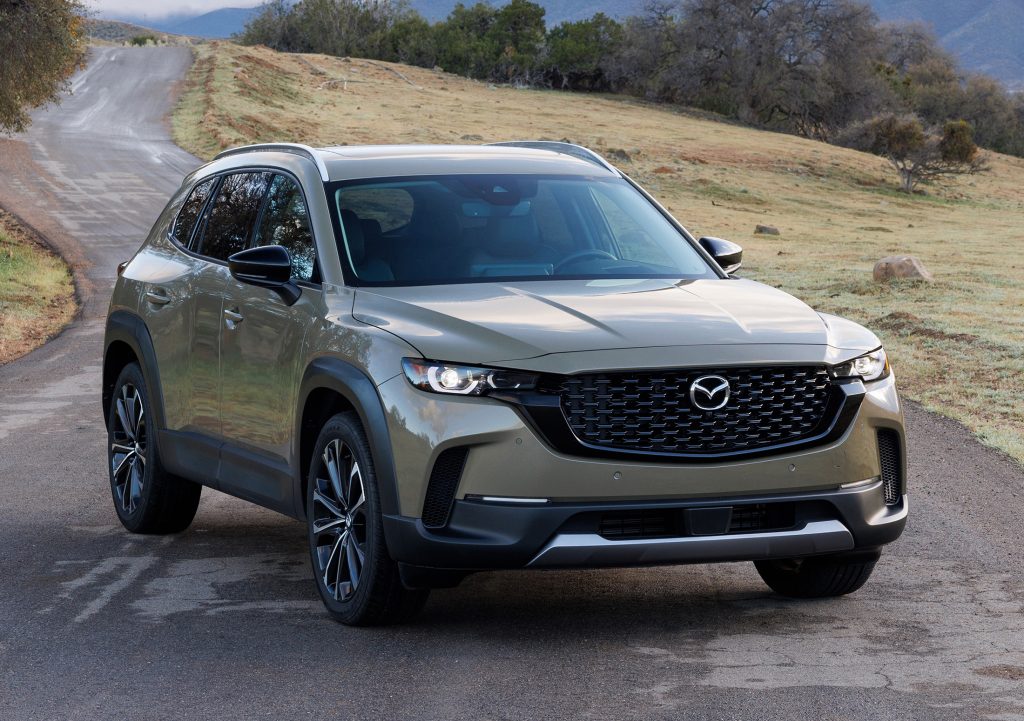 Despite being lower and wider than the CX-5, the new CX-50 is styled to look more rugged and SUV-like with black fenders and a wider back pillar.

They’re both handsome vehicles, but I wish Mazda had reversed the styling choice. The taller CX-5 should be the more off-road-friendly version, and the lower CX-50 should be the sporty, fun, four-door Miata with a sport suspension to match.

In reality, the CX-50 is one of the best handling crossovers you can buy today, a longtime hallmark for Mazda. It feels natural, comfortable and predictable in turns, and it lunges with a sports-car-like eagerness when you press the throttle.

My tester came with the upgraded engine choice, a 2.5-liter turbocharged four-cylinder that’s tuned for lots of torque — 310 pound-feet, to be exact — which is similar to what you’ll find in a lot of pickup trucks. The horsepower is rated at a less impressive but still stout 227.

The CX-50’s base engine has the same displacement, 2.5 liters, but makes 187 horsepower and 186 pound-feet of torque without the benefit of a turbocharger.

Fuel economy isn’t that different between the two engines. The base engine is rated for 30 mpg in the city and 24 on the highway, both of which are only 1 mpg better than the turbo version. Given the output difference, I’d expect a bigger hit to fuel economy from the turbo. 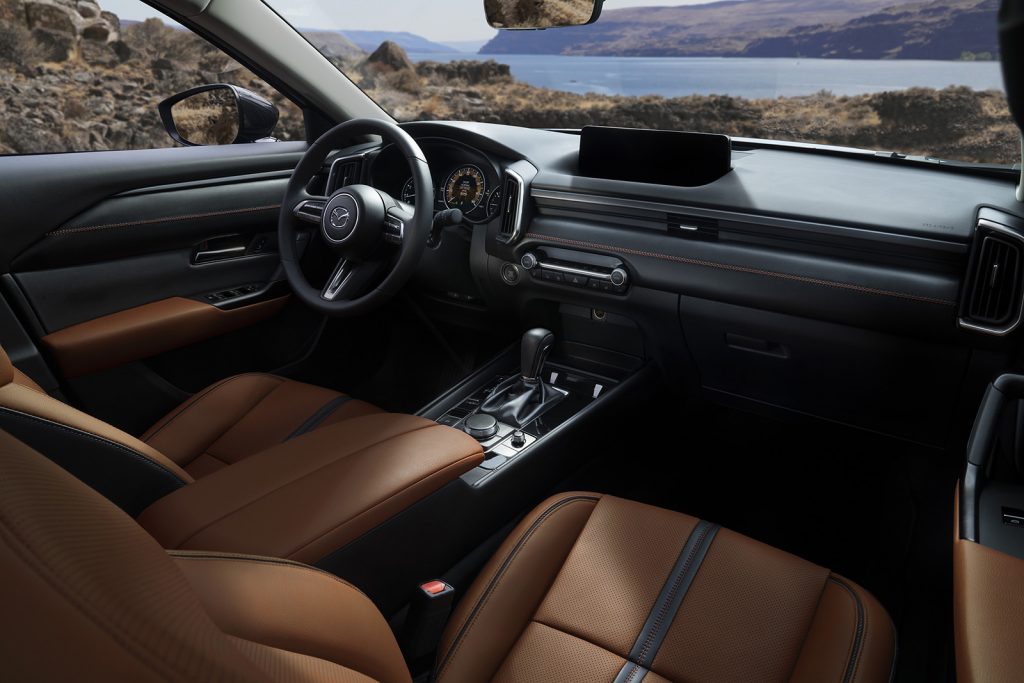 All those numbers are with all-wheel drive. Like Subaru, Mazda is making its entire crossover lineup come with standard AWD, which helps traction on wet or icy roads but tends to punish fuel economy by a few miles per gallon.

The CX-50’s cabin is spectacular, as it should be in a newly released crossover. The high-end trims have the look and feel of what was the domain of luxury cars a few years ago: lots of soft-touch materials with contrasting stitching, solid construction and modern design that makes technology easy to use.

Its tech system, Mazda Connect, lets you use either the touchscreen on the dash or a rotary selector on the center console to access its many digital features and settings. I found the screen was mounted too far forward to be comfortable to touch, so most of the time I used the rotary knob, which worked fine. People with longer arms may have better luck with the touchscreen.

As of this moment, though, that base version looks like vaporware. Mazda’s website currently lists the base S trim as unavailable, along with most of the other affordably-priced versions. The cheapest CX-50 trim you can buy now, according to their online store, is the 2.5 S Premium Plus model, which starts at $37,150.

When you upgrade the engine, the Turbo Premium Plus tops the lineup at $42,300.