After a complete redesign last year, the Volkswagen Jetta is back with several refinements to make it a better value in 2016.
My personal favorite is the addition of Apple CarPlay — a feature I’m starting to sorely miss every time I drive a new car without it — along with Android Auto and MirrorLink, making the Jetta among the first new cars to achieve the trifecta of smartphone integration.
And, make no mistake, that’s becoming a bigger factor for today’s buyers. Where previous generations may have wanted to know about horsepower and fuel economy numbers, today’s car shoppers often have one big question: How well does it work with my phone?
In the case of the Jetta and an iPhone 6, the answer is “exceptionally well.” Simply by connecting my phone to the car using a USB cable — no Bluetooth pairing process required — I could instantly make calls and operate select apps without even touching the phone. It’s convenient and safer, letting you keep your eyes and attention on the road.
I even sent this message to my wife: “I’m texting you while a cop is right behind me! How cool is that?”
The entire exchange takes place through voice commands and your car’s controls instead of typing into your phone, which helps you keep your attention where it belongs. Can it still be distracting? Absolutely. But I also think it’s dramatically safer than that plague of the roads that we see all too often: idiots typing into their phone while driving. The Jetta’s no-nonsense exterior design sets the stage for a car that aims to provide a lot of substance for the money. It’s been Volkswagen’s top-selling vehicle for many years.

Aside from the better smartphone brains, the Jetta makes a few other changes this year.
The most noticeable addition is a 1.4-liter turbocharged, direct-injected, four-cylinder engine that boosts its EPA fuel economy rating up to 40 mpg with a manual transmission. That’s impressive for a car with a back seat that feels this roomy.
In fact, it’s the Jetta’s spaciousness that makes it stand out to me. In typical German fashion, it’s a car that you’d buy based on the numbers — the knee room, the head room, the elbow room — rather than any particular knockout punch from its features list or gimmicky styling. It’s a straightforward, no-nonsense car.
Adaptive cruise control, another feature I’m starting to miss on cars that lack it, is now available as part of the Jetta’s Driver Assistance Package.
And, in addition to the usual safety features such as multiple airbags and electronic stability control, Volkswagen is now fitting every Jetta with something to help mitigate the damage from wrecks. It’s called post-collision braking. 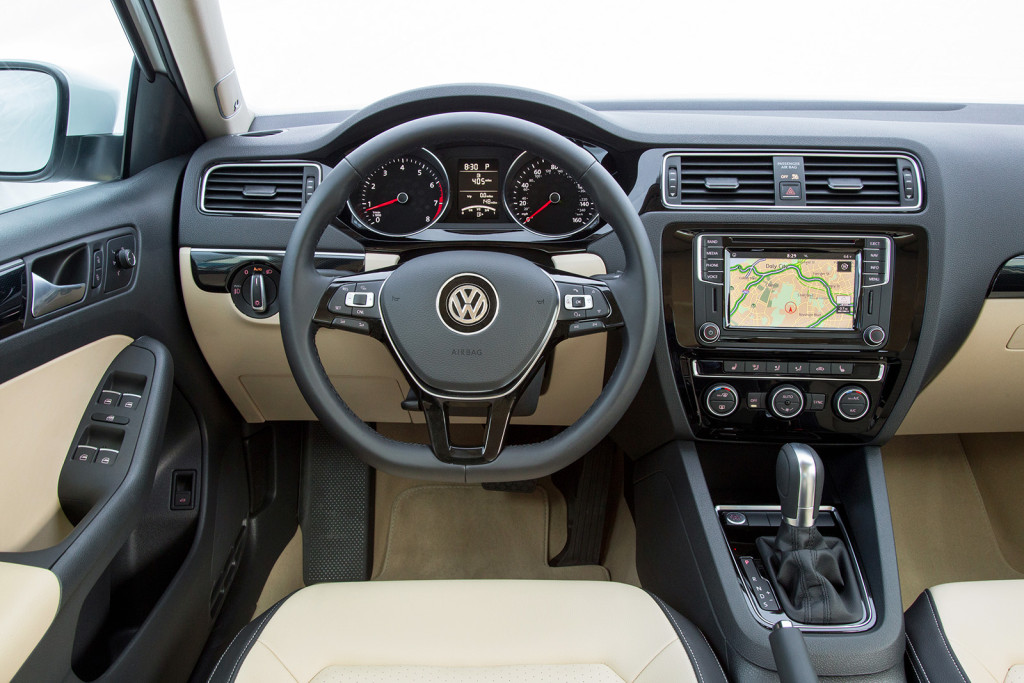 The Jetta’s cabin feels roomier than many of its competitors, particularly in the back seat where knee and elbow space are surprisingly generous.

If the airbags deploy from an accident, the Jetta will automatically apply its brakes afterward to help “reduce residual kinetic energy,” VW says. To me, it sounds like a fancy way of saying it keeps a two-car wreck from turning into a three-car wreck if you don’t stop your car from rolling, an interesting concept that I’m not sure I’ve seen on another new vehicle before this.
Pricing ranges from the base S model at $17,680 to $26,920 for the well-equipped and sporty GLI. A Jetta Hybrid also is available starting at $31,120.

Why buy it?
The latest smartphone integration and a new, more efficient engine help the Jetta focus on providing more for your money in 2016.