While crossover vehicles seem to be getting all the love from buyers these days, sedans haven’t gone away.
Some of them — including the all-new Kia K5 — are making the case that four-door passenger cars have switched from being the industry’s most bland, boring segment to one of the most exciting.
That was evident every time I got behind the wheel of the K5, Kia’s replacement for the aging but still competent Optima. Compared to the slew of bloated, lookalike crossover vehicles that have flooded the new-car market and shown up in my driveway recently, the K5 is an absolute thrill ride.
Even though it’s not built to be a true sports sedan, with power going to the front wheels and a somewhat isolated feeling in the cabin, it does a good job channeling the sensations of a small BMW.
An all-turbocharged engine lineup helps with that, along with optional all-wheel drive and an impressively solid, stiff-feeling chassis. It’s tuned for a quick response and nimble, tossable feeling on winding roads that galumphing crossovers simply can’t match.
A turbo 1.6-liter, four-cylinder, 180-horsepower engine is paired with an eight-speed automatic transmission in the base trim. 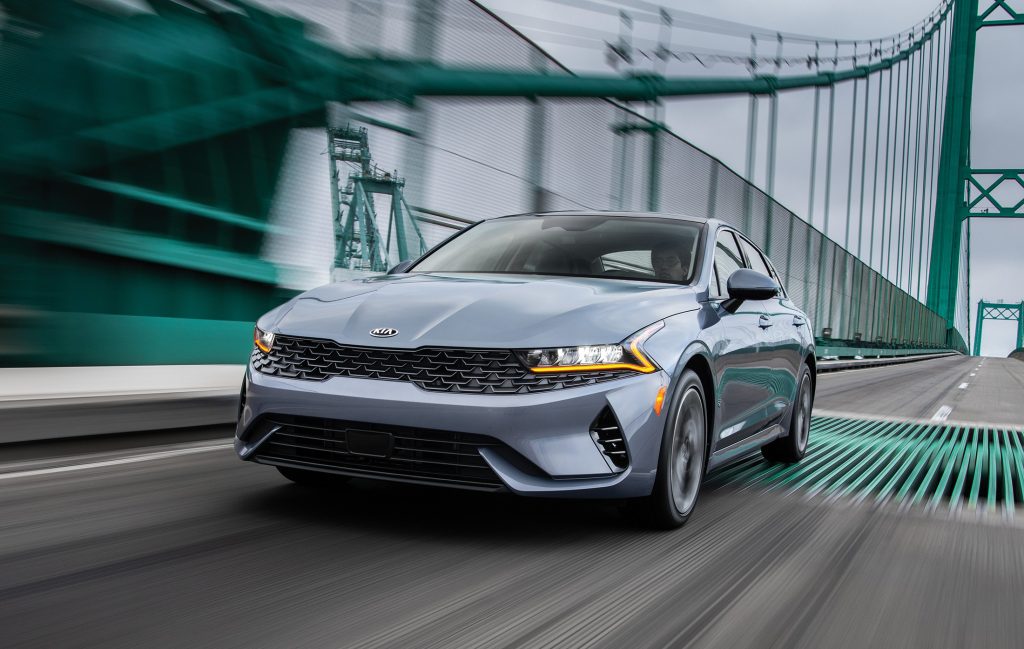 The all-new K5 replaces the Optima in Kia’s lineup. It’s more aggressive than the Optima was both in how it looks and how it drives.

My tester, a GT model, came with the upgraded 2.5-liter, four-cylinder turbo engine that borders on overkill for a car this size. It makes 290 horsepower and 311 pound-feet of torque in a gauntlet-throwing, expletive-spewing exclamation that four-door cars can be fun.
And it works.
The powerful engine in the GT shows off the engineering behind the K5. It uses a dual-clutch automatic transmission to respond in a fast, precise way, mimicking the one-with-the-road sensation enthusiasts normally enjoy with a manual transmission.
It shifts with near-instant, authoritative clicks en route from a standstill to 60 mph in 5.8 seconds, Kia claims.
The one downside is that the all-wheel-drive system is only available with the smaller engine. That means the GT sends its monumental power straight to the front wheels, which tend to lose grip and chirp in an ever-present reminder that the K5 mimics sports-sedan sensations but falls short of the rear-wheel-drive ideal. 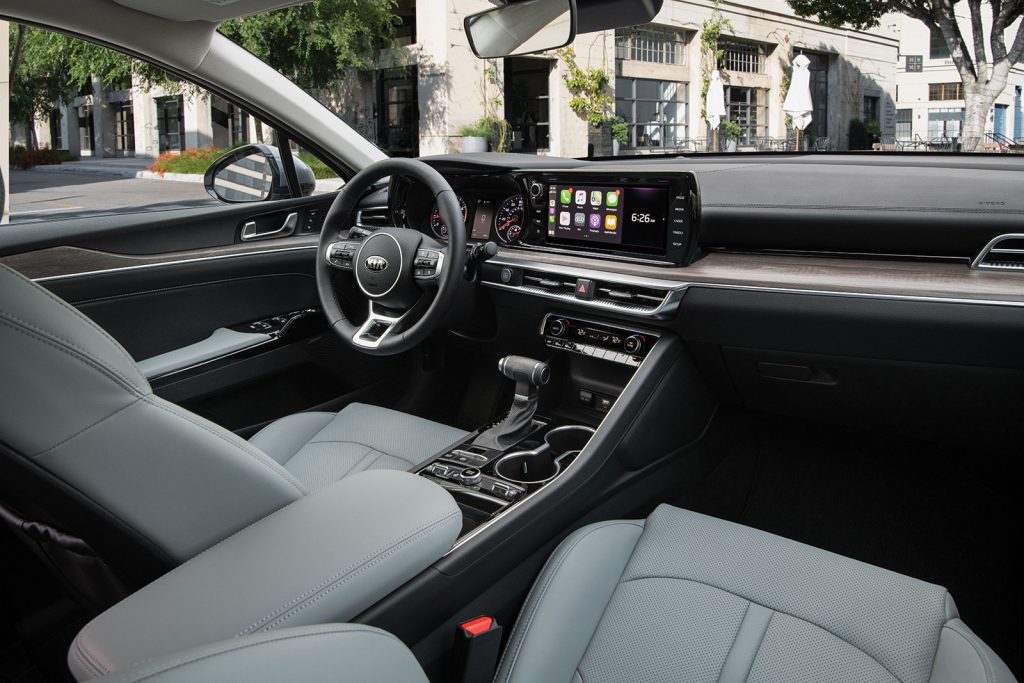 A big, chunky shifter that looks like the throttle on a jet aircraft puts the K5 into gear. An eight-speed transmission sends power to the pavement, and all-wheel drive is optional with the smaller of two turbocharged engines.

Styling on the K5 is more aggressive than the Optima ever was, including LED daytime running lights that remind me of a switchback mountain road. It’s a contemporary and sharp body, but not necessarily what I’d call classically beautiful. It’s clearly influenced by the Kia Stinger, though, which is.
I like a lot of things about the K5, but my favorite of all might be the pricing. It starts at $23,590, a surprisingly low price for a car that drives like something expensive and German.
It comes with a long list of driver assistance and safety features, as is common these days, including Lane Following Assist and a system that monitors the driver’s attention. Smart cruise control, though, is only a choice once you reach the GT-Line trim starting at $25,490, and even then as part of a $1,700 bundle.
Pricing for the powerful GT tops the lineup at $30,590, which seems like a bargain for the performance you get. The $4,000 GT1 Package adds Bose audio, a bigger touchscreen, more advanced driver-assistance features and a number of other luxuries.

Why buy it?
It looks and drives like a premium car at an affordable price. The GT’s upgraded engine offers neck-snapping acceleration. It’s a reminder of just how fun and rewarding sedans can be.