It’s remarkable that Volkswagen’s engineers spent years creating an all-new design for the 2019 Jetta, but my brain most loudly registers one crude thought after driving it.
“There’s a red stripe around the wheel!”
Yes, the freshly designed Jetta looks more svelte with coupe-like arches. It has a completely new interior that is built around the lightweight-but-solid MQB architecture, making it feel better than I can ever recall a Jetta feeling from the driver’s seat. It’s taller, wider and longer than before.
Still, my caveman brain is blinded by the wickedly cool red stripe on the wheels.
That’s because the all-new car I’m driving isn’t the ordinary Jetta, but the GLI 35th Anniversary Edition that pays homage to some of the most divine four-door cars Volkswagen ever created.
The GLI started as a 1984 model that essentially was a four-door version of the Rabbit GTI — known as the Golf GTI overseas — that pretty much invented the “hot hatch” car. The GLI was living, driving proof that four-door cars could actually be fun.
What was its signature design cue through the years? Just like the GTI hatchback, the GLI sedan got ridiculous but wonderful red accents inside and out. 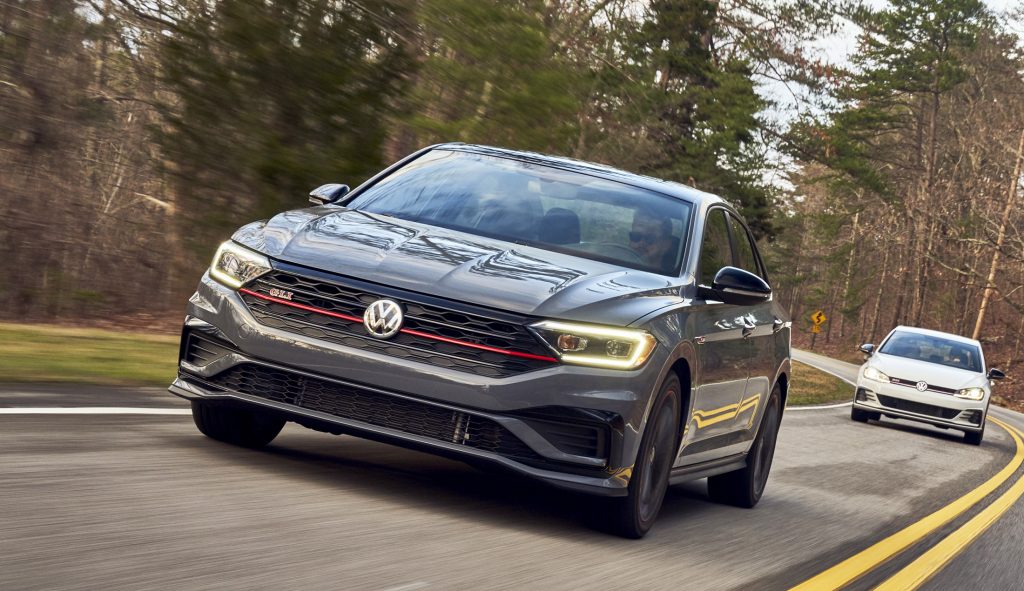 The Volkswagen Jetta gets a completely new design for 2019. It’s based on a different architecture that feels nimble but stiff, and it looks more sleek and coupe-like.

The 35th Anniversary Edition takes the GLI back to its roots, and not just from a styling perspective.
Yes, it has plenty of tastefully diminutive red trim, including a stripe across the grille, “GLI 35” badges and the colorful ribbon around its timeless phone-dial wheels.
It also harkens back to another hallmark of the first GLI: technical innovation.
While the early version used fuel injection in its high-compression engine and a close-ratio, five-speed transmission, the 2019 iteration uses a 7-speed direct-shift automatic and 2.0-liter turbocharged engine that makes 228 horsepower.
If you want to feel old, here’s a fact. The 2019 GLI makes more than 2.5 times as much power as the 1984 classic that was considered fast in its day.
And it doesn’t stop with engine upgrades. Adaptive chassis control lets the driver adjust the damping force with three different firmness settings. It has big disc brakes with red calipers — of course — for spectacular stopping performance. And it has a wonderfully modern cabin with all the fixings you’d expect in a contemporary car, plus more, such as a performance monitor screen that shows G-forces and turbo boost pressure. 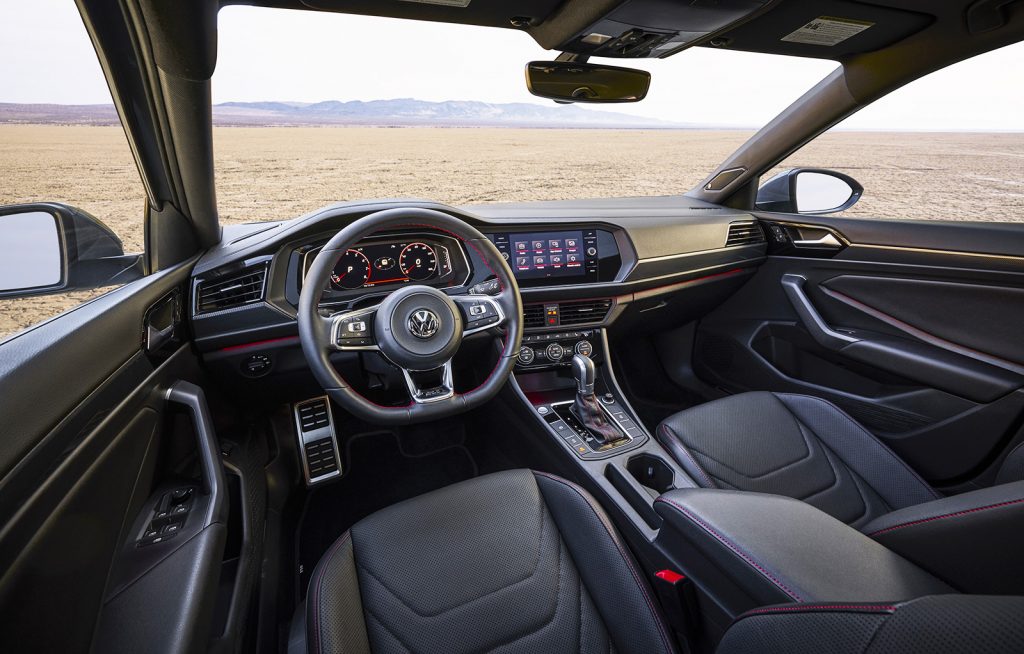 The Jetta’s newly designed cabin is centered around the driver, including a touchscreen on the center stack that angles toward the left seat.

Driving it is sheer bliss, especially for the price. I smile just as big behind the wheel of this Volkswagen as I do driving pricey sports sedans from Mercedes-Benz and BMW.
In addition to the super-cool GLI special edition touches, it benefits from all the other upgrades the 2019 Jetta enjoys. Roomier seating, sexier exterior styling, more premium materials on the inside, dramatic ambient lighting at night and a long list of modern tech features give buyers reasons to check it out.
Jetta pricing starts at $18,745 for the base S model with a manual transmission and ranges up to $27,695 for the luxury-oriented SEL Premium.
As for the Jetta GLI, the basic GLI S starts at $25,995, while the special-edition GLI like my tester is priced $100 more than the SEL at $27,795. There’s also a GLI Autobahn version with more luxury features priced at $29,995.

Why buy it?
An all-new design is a noticeable upgrade to the popular German four-door sedan. A special edition of the performance-oriented GLI, in particular, pays respect to the car’s most glorious ancestors.