Derek Price
By Derek Price
Automotive Writer
How can Toyota, a Japanese company, make one of the most all-American vehicles on the road?
That’s the question I’m asking myself after driving the 2014 Tundra for a week. Not only does it does it have the same big, brawny, apple pie and Uncle Sam spirit of American trucks, but it’s actually got more American DNA than many domestic-brand vehicles.
The new Tundra was designed, engineered and assembled entirely in the United States, with styling from Michigan and California, an engine from Alabama, a transmission from North Carolina, and assembly done in San Antonio, Texas.
It should come as no surprise, then, to see the Tundra’s changes in 2014 follow the same trends that Ford, General Motors and Ram have been successfully using to move pickups in the Land of the Free for decades.
For starters, its fresh look appeals to American brashness. 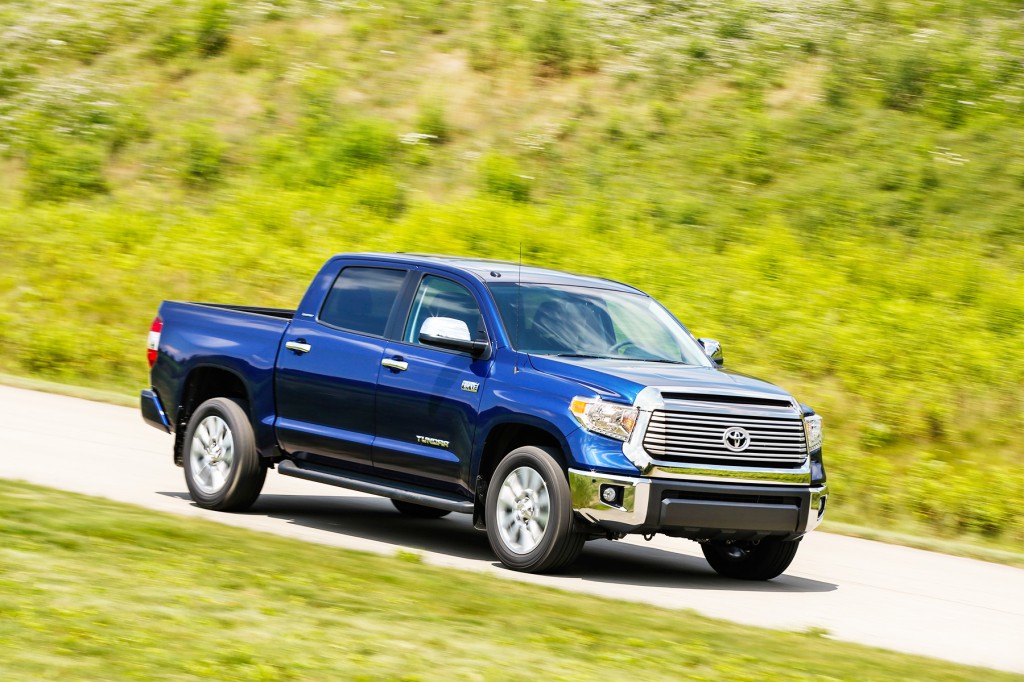 A bigger, more aggressive front grille with lots of chrome sets the tone for the revised Toyota Tundra in 2014. It’s a Japanese truck with a surprisingly American personality.

The Tundra’s front grille and overall styling has been re-worked to be bigger, bolder and more aggressive than before, with more of a chiseled, squared-off look inspired by heavy industrial equipment.
To my eyes, the new grille is a fitting change from the happy, smiling faces on most Toyota products. The Tundra looks like it wants to punch you in the face and steal your lunchbox, which is a good thing in the over-the-top world of full-size pickups.
It’s also following another American truck trend: trim levels that offer drastically different flavors to suit varying tastes.
At the top of the lineup, for example, you can choose whether you want the Platinum, which is sleek, modern and urban looking, or the 1794 Edition, which is like driving around in Gene Autry’s dude ranch. The look and feel of the two versions is so distinct that they feel like totally different trucks.
The version I tested is the Limited, and it’s what Toyota calls the “active premium” version of the Tundra. It’s not as fancy as the Platinum or the 1794, so it seems like more of a working man’s type of truck — the kind you won’t mind getting dirty and beating up just a bit on the job site if necessary. But it’s still got things like leather seats and dual-zone climate control to keep you comfortable.
While the inside and outside of this truck have a lot of nice upgrades, the one disappointment to me is that the powertrains are staying exactly the same. Toyota offers the same choice of three engines — a V6 and two V8s — none of which are rated for more than 20 miles per gallon on the highway.
I wish Toyota had a more daring, fuel-efficient option, like the small turbocharged and diesel engines that its competitors have rolled out recently.
On the higher end of the spectrum, though, I like the 5.7-liter i-Force V8 that came on my test truck. This is the most popular engine on the Tundra for a good reason. It makes a big, meaty 381 horsepower and is rated for 18 miles per gallon on the highway, which is competitive with the large V8s from Detroit’s big three. 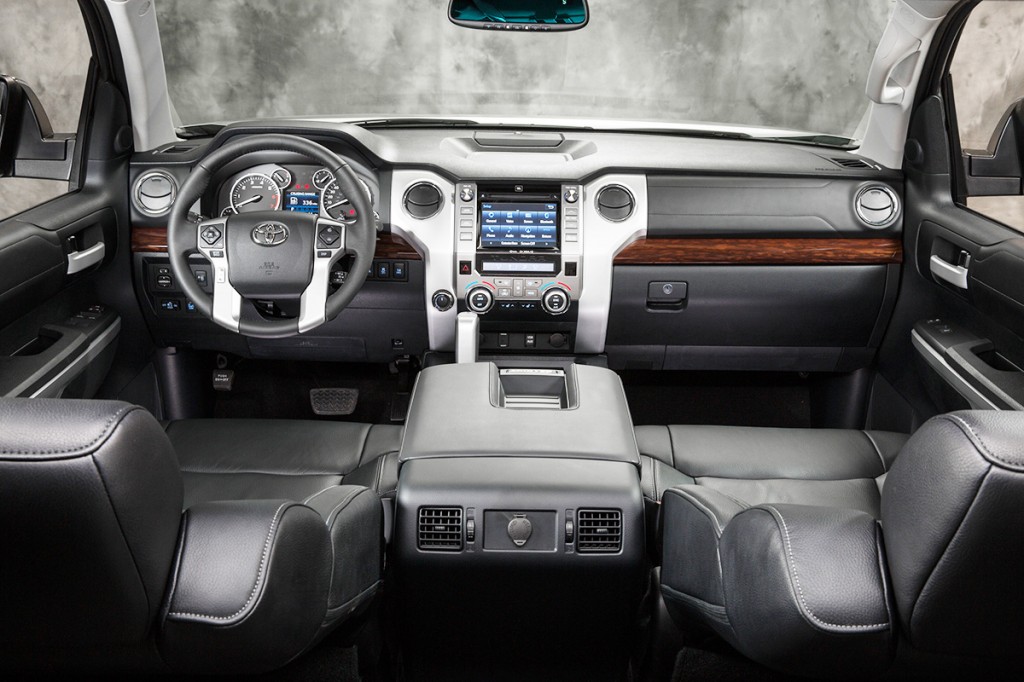 With leather seats and dual-zone climate control, the Tundra Limited offers a lot of creature comforts without the premium price of this truck’s top-level trims, the Platinum and 1794 Edition.

I also love the fact that Toyota has adopted the J2807 towing standards before any other half-ton truck maker. If you don’t know what that means, Google it. You’ll be glad you did, and you’ll be a bit more skeptical about the pie-in-the-sky tow ratings that some truck brands produce using their own, in-house, non-standardized testing methods.
To me, that makes the Tundra a safe choice in a market filled with braggadocio and hyperbole. The fact that it’s so thoroughly American-made is just a nice bonus.

Why buy it?
With a thoroughly refreshed design this year, the Tundra has more aggressive styling and nicer cabin layouts. Toyota’s adoption of the J2807 towing standard gives it added credibility.